It has been seven seasons in the making but finally Jon Snow and Daenerys Targaryen are about to meet and you can hear the collective fandom giggling with delight. What will happen when these two come face to face? Whose going to make the first move? How long before they figure out they’re related? Is this a match made in heaven? As a fan of the book, and pretty much knowing I’ll never get to read the conclusion of this story, my anxiety levels are high. I’m nervous. These are two of our major characters meeting for the very first time. What if they don’t like each other? Holy crap, could you imagine? I always pictured that their meeting would be something epic but what if they each take a look at one and another and swipe right. Oh god, the heart break.

I’m also tackling the moral dilemma of whether or not I should ship the two of them. On the one hand, Jon and Daenerys seem destined to be a badass Westeros celebrity couple. Seriously, whose going to eff with these two? One has wolves the other dragons. One has ice the other fire, see what I did there? Is it really incest if you were raised by the Starks and made to believe that’s who you are? And then I type that sentence and it gets icky and I’m not sure if I want to ship them anymore. We know that the Targaryen’s liked to keep the bloodline pure but do we need Jon and Dany to get all Jamie and Cersei about it? You see my issues here, yes?

There is no doubt that they need each other. Daenerys is trying to win all of Westeros and Jon is trying to save all of Westeros. Who among us doesn’t want to see the White Walkers battling some freakin’ dragons?! If only for the possibility that one dragon will die and become a White Walker dragon. The visual would be insane. Yet this match isn’t a sure thing. I still believe that Melisandre can be a massive hang up here, especially when it comes to Davos who promised to kill the Women in Red the next time he saw her. Would be a real crappy way to start that meeting. Whatever happens though we’ve waited seven years for this, longer if you’re a book sufferer, and I fully anticipate the show to celebrate the epicness of the moment. 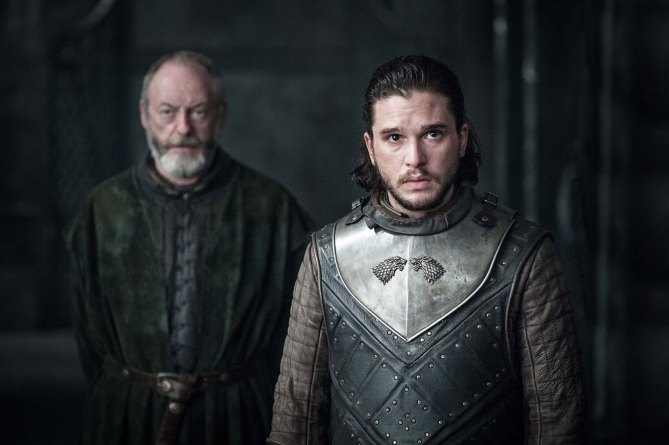 That’s not all that’s happening though. Dany was dealt her first real defeat last week when Euron came in and destroyed Yara’s fleet of ships, killed 2/3 of the Sand Snakes, took hostages, and re-introduced us to Reek. There is little doubt these hostages are the “gifts” he promised Cersei, and something tells me that her dead revenge driven heart is going to skip a beat when she sees them. Remember that Ellaria literally gave Myrcella the kiss of death and there is no way Cersei is unaware of that. If we thought the shame nun was getting it bad, and she is, then I shudder to think just what Cersei has in store for Ellaria. I’m not so concerned for Yara and the other Sand Snake as they’re kind of bonus prizes, but the episode is called “The Queen’s Justice” so I would imagine something all types of awful is going to be served.

Although the Queen’s justice could go another way as Dany looks to avenge her first defeat. It might be time that she takes the fight to the Lannisters in an attempt to gain a victory back, and make the people of Westeros see she’s some one worth paying attention to. Could this be the week that Casterly Rock falls?

There you have it Geeklings. Episode three looks to be packed with tons of fanboy moments. What’s the one you’re looking the most forward to? Reunions in the North or first meetings in Dragonstone? Can Dany get a victory back? And how awful do you think Cersei will be this week? Sound off in the comments below. If you’d like to talk more Thrones with me you can catch me on Twitter @iamgeek32. In the mean time, happy viewing and see you back Monday with my review.