In a recent interview with Entertainment Weekly, Game of Thrones star Aiden Gillen spoke about the upcoming seventh season of the HBO hit series and addressed a fan theory that had been in question since Season 2.

For years, there has been much speculation as to whether of not Petyr Baelish recognized Arya way back in the second season. Here is a brief rundown:

While posing as a recruit of the Night’s Watch, Arya is held captive by Ser Amory and eventually taken to Harrenhal. Tywin Lannister returns just before Gendry is to be killed. He stops the ordeal and also notices that Arya, who has also been posing as a boy, is a girl. He asks her why and she responds that it was safer to travel. He admires her and makes her his cupbearer.

During a war council, Arya is tending to Tywin and the invited men. They are asked to leave when Littlefinger, Petyr Baelish, arrives. Arya is worried that she will be recognized. She met him briefly in Season 1 when she asked why he was given the name “Littlefinger.” Trying her best to avoid eye contact or him seeing her face, she accidentally spills wine on his hand while pouring it. She apologizes to which he responds “it’s only wine.” He glances at her face and pauses for a bit. Keeping his intrigue, he continues his conversation with Tywin. 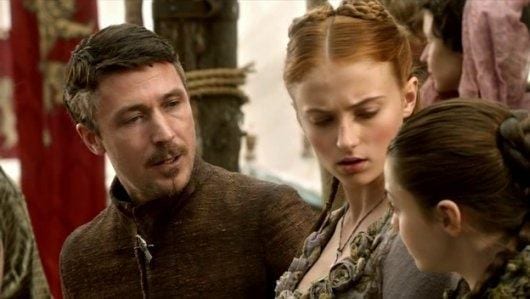 Looking back at the episode, it is obvious that he does recognize Arya. What wasn’t obvious was whether he “knew” right away who she was and just kept it to himself or if he recognized her from somewhere and not knowing exactly from where he had seen her.

Gillen finally put the rumors to rest. He did know that it was Arya but chose to not say or do anything. But why? Maybe for his own selfish reasons or because of his feelings for Catelyn, Arya’s mother.

He doesn’t go into much detail about why he chose to not out Arya to Tywin but he did state,

“It was unclear if he recognized her or not, but I have my own thoughts on that. Yes, I did recognize her — I just didn’t say anything or do anything about it.”

Now that we have that settled, what about the whole Lord Baelish/Sansa Stark relationship? Does anyone else think that he is totes creepy? 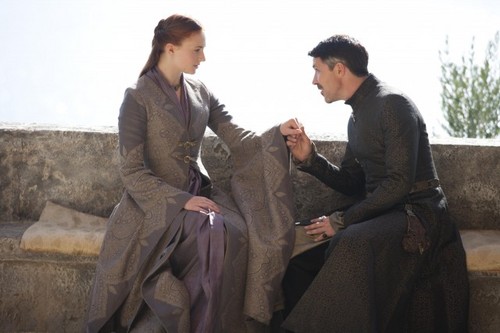 We know that he is scheming his way up to the Iron Throne by trying to put Sansa and John Snow at odds. Hopefully, Sansa will come to her senses or perhaps, she sees right through Littlefinger’s schemes and is just waiting for her chance to put an end to Baelish.

Here’s more of Gillen’s thoughts about him becoming the ruler of the Iron Thone with Sansa by his side,

“I finished last season on a promising note by laying my cards on the table — at least to Sansa. I was [sowing seeds of doubt about Jon Snow] throughout my appearances in season 6, and, yeah, that will continue. It’s pretty obvious what my game is there. We’re playing out that final exchange in the Great Hall in Winterfell. But the same time my character is becoming quite aware that Sansa is becoming as bright as me and just as wary of my manipulations of her. They’re onto each other. They use each other. They enjoy each other. And they keep a lot from each other. There are all kinds of mixed things going on with Littlefinger and his relationship with Sansa, so watching her grow in stature is quite enjoyable.”