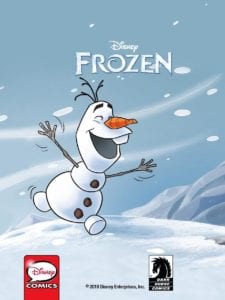 If the ‘Frozen‘ lover in your life just cannot ‘Let it Go‘ then they will be excited to know that Disney is teaming up with Dark Horse Comics with plans to release a three-part mini-series comic book to debut in August of this year.

Joe Caramagna will come on board as the writer and will work with artists from Kawaii Creative Studio to turn the cartoon characters into comic book characters. In the article on newsweek.com, Dark Horse Comics gave us hint as to what we can expect from the first issue of ‘Disney Frozen’ 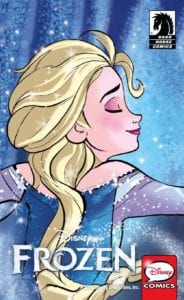 “Disney Frozen #1 finds Queen Elsa and Princess Anna trying to get to the bottom of things when the peace of their beloved kingdom is disrupted. There’s a wild animal loose in the village, destruction in the forest, and unrest brewing in a nearby kingdom. Luckily, Elsa and Anna will have the help of Olaf, Kristoff . . . and a mysterious, adventurous young woman to restore peace in their kingdom.”

The press release also mentioned that the duo will team up again on several projects over the next few months but declined to say if the comics would be based on any other Disney animated properties. Dark Horse Comics has already published many 20th Century Fox properties such as ‘Predator’, ‘Aliens‘, ‘Prometheus‘, ‘Avatar’ and ‘Buffy the Vampire Slayer’.