If there is one topic that is not as heavily discussed as it should be, it is violence in the media. As a Military Police Officer, we deal with hundreds of cases of social media violence and harassment; Facebook being one of the most popular forms of social media in which these incidents occur.

Mark Zuckerberg, cofounder and CEO of Facebook, said Wednesday the company will add 3,000 people to its global community operations team, in addition to the 4,500 already on the team, to help “review the millions of reports we get every week.”

Over the last few weeks, we’ve seen people hurting themselves and others on Facebook — either live or in video posted later,” Zuckerberg wrote in a Facebook post. “It’s heartbreaking, and I’ve been reflecting on how we can do better for our community.”

Below is the full status posted by Zuckerberg: 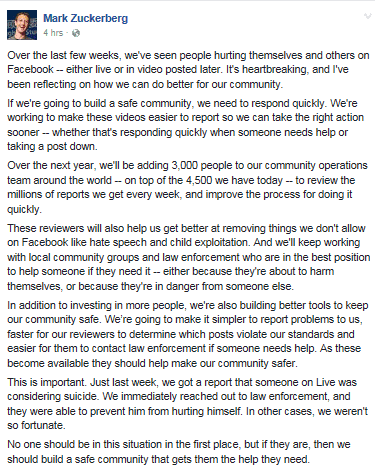 In today’s day and age, one of the things that we know for sure is that anything can happen at any point and time.

This announcement from Zuckerberg comes a few weeks after Facebook was faced with an outcry over a Cleveland murder video that stayed up for hours on the social network before it was finally removed from the site.

Not long after, a man in Thailand posted videos on Facebook of himself killing his 11-month-old daughter, before killing himself. These videos remained on the man’s Facebook page for about 24 hours.

The news of these additional 3,000 employees comes as a great comfort. Facebook probably faces thousands if not millions of reports throughout the day (in relation to harassment, offensive material and other miscellaneous reports) so the addition of these employees to the team will ensure that all hands are on deck; and issues will be resolved much faster.

Sarah T. Roberts, an assistant professor at UCLA who studies online content moderation, calls the additional hires a “drop in the bucket”. After all, Facebook has nearly two billion users… that is a lot of content to monitor.

“It is catch as catch can. And it is not a matter of if another incident will happen, but when,” she says.