The first day of the Expo is over and what a day it was! We’ve already covered the press conferences in another post, so we’ll dive right into the floor coverage. Who has the coolest booth? Who is giving out the best swag? Which games have playable versions? And who had an unexpectedly inclusive booth? All this and more is answered below! 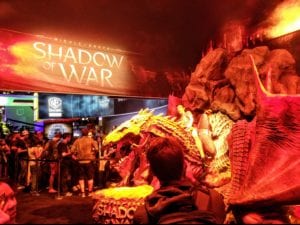 There are some amazing booth designs here at E3, and more than one giant dragon, but the honor for “the coolest giant dragon that you can also climb on” has to go to Middle Earth: Shadows of Mordor. The line for a photo op at the booth circled the entire booth most of the day, especially once the WB Games theater next door started showing actual gameplay footage. As excited as I was to see the studio’s other games (Lego: Dimensions expansions and Lego: Marvel Super Heroes 2), that dragon overshadowed it all. 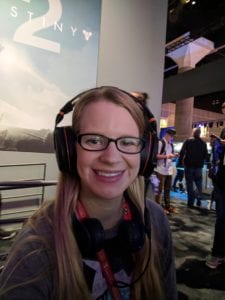 It was the Destiny 2 booths (yes, that’s plural) that win today’s award for “best swag.” In addition to the t-shirts that all participants got after playing a demo campaign, Bungie partnered with Nvidia to offer some seriously cool swag. I played the campaign demo in the South Hall first and promptly got schooled by the other players. (If anyone asks, it’s because my controller kept disconnecting and not at all because I’m really really bad at FPS games.) At least I got a t-shirt for my troubles.

Then I went over to the West Hall for a media appointment. Here I got to try out the single-player mode and play through the first mission of the game. And y’all- it’s amazing. You can read more about Destiny 2 elsewhere on the site, but if you liked Destiny, you’re going to love Destiny 2. I did much better in this demo, and Nvidia even sent me home with a 4k video of my gameplay on a USB drive. I’ve been told that the reaction video of me playing through the mission is much more entertaining. Both will remain unpublished. 😉 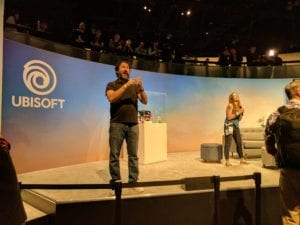 The final award I have to give today goes to Ubisoft for having an American Sign Language interpreter on stage for all live broadcasts. The world of accessibility is near and dear to my heart though my job with the Fan Fest cons, and seeing a game company provide a service without being asked or required to do so was amazing. For decades, gamers with disabilities either had to create their own accommodations or miss out on a game entirely. Those barriers are disappearing now as more and more developers are including accessibility features directly into their games, but there’s still a long way to go. For now, it’s very impressive to see a major game developer display a public commitment to accessibility.

And that’s it for today’s View From The Floor recap. Remember that you can see all the photos and videos from today on our Facebook page and under the hashtag #FanFestFromTheFloor. Tune in tomorrow to see more live streams and even more photos!

Home » Fandom » E3 Coverage: The View From The Floor, Part 2