As of 5 pm yesterday, E3 2017 is officially in the history books. It was a banner year for the event, which opened to the public for the first time in over a decade. There were upcoming games on display, updates on games still in development, tons of tech to try out, and plenty of swag to be earned.  For the final wrap-up of the event, here are my favorite games that you should definitely be watching out for.

Super Mario Odyssey (Nintendo): The wait-times to play this game often stretched past the 6 hour mark, and yet people still stood in the line. Boasting a 20-minute gameplay demo and an exclusive pin and visor set, Nintendo certainly knew how to draw fans in. It was Thursday morning before I managed to get my hands on the game, and it was well worth the wait. Super Mario Odyssey is a semi-open world game set in a brand-new universe, but it retains all the Mario charm fans want. I won’t go into a ton of detail on gameplay here, but there are new tricks to be learned, new moves to be mastered, and over 3,000 collectibles to be discovered. The game releases on October 27, 2017. 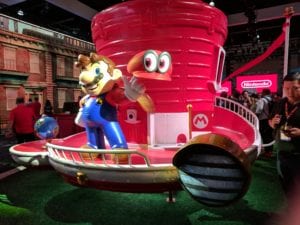 Project Cars 2 (Bandai-Namco): This is another game that really deserves it’s own article. However, the most important thing to know is that the heart of PC2 is still in being fan-built. All the features that fans loved from the original are back, but developers have seriously tricked-out the specs on everything. PC2 is the first game to utilize Live Track 3.0, which is an in-house technology that delivers dynamic everything. Weather, time of day, and seasons are all customizable, and the track will furthermore displays real-world puddling and rain patterns. The tracks themselves have been improved. The game now boasts the largest track collection of any racing game currently on the market, and each and every one was laser-scanned by drones to ensure millimeter accuracy. There are new iconic car brands to choose from, new career and online tournament modes, and a crazy amount of physics work to ensure that everything from the roof rack to the tires themselves moves just like a real car. Check out this game on September 22, 2017.

Destiny 2 (Bungie): Nvidia offered players the chance to play through the entire first mission of Destiny 2, which amounted to about 15-20 minutes of playtime on average. It took me a while longer (as the last FPS I played was Goldeneye on the Wii), but I can confirm with certainty that the sequel is just as good as the original. Expect epic space battles, witty one-liners, and an overall truly enjoyable experience for all when this game releases on September 6, 2017. 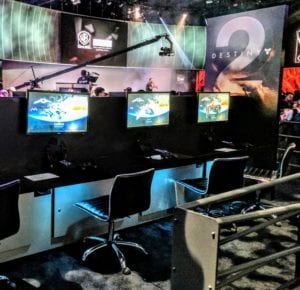 Harvest Moon: Light of Hope (Natsume): Where to even begin with the newest Harvest Moon. The series has over 30 entries since it’s original SNES debut in 1997. Despite this, somehow Natsume seems to keep coming up with engaging new ways to play. This newest game is still a farming simulator, but has undergone a major tune-up to both bring the series back to its roots and push it forward into the new age of simulators. The premise of the game is pretty simple: after the main character (players can choose their name and gender) washes up on an unfamiliar island, he or she is charged with returning hope and light to the rather-despondent town. Players will collect supplies to repair building, grow crops to encourage trade, and develop friendships and relationships with their fellow villagers. Don’t expect the actual gameplay to be simple, though. Every choice a player makes impacts the quality of their crops and animals through a dynamic new evolution system. The game is still in development, so there will undoubtedly be more news before it’s anticipated release in early 2018.

Ni No Kuni 2: Revenant Kingdom (Bandai-Namco): the second offering on my list from Bandai-Namco is another sequel. This time, it’s a JRPG to follow up one of my favorite games ever to hit the PS3. This isn’t a direct sequel to the original game, but it shares many of the same themes. It’s core focus is coming of age and the quest to prove one’s worth. Players will follow Evan Pettiwisker Tildrum, a boy king who has had his throne usurped by a weasel named Otto Mausinger. Evan must find a Kingmaker and earn his Kingsbond back before he can reclaim his throne. I’ve been excited about this game since it was first announced two years ago, and watching actual gameplay has only made me more excited. It’s a perfect blend of anime and RPGs, which only makes sense considering the lead development team roster is a veritable “who’s who” of Studio Ghibli fame. Anyone who has ever watched a Ghibli film and wanted to be more immersed in it should definitely pick this one up on November 10, 2017. 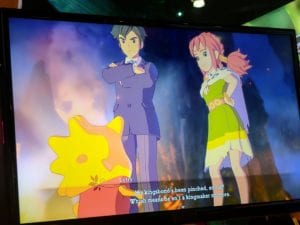 And that’s it for our “View From The Floor” coverage. But don’t despair- there’s plenty more to come over the next few months. We’ll have game spotlights, more interviews with developers, and game reviews as all these anticipated release dates finally arrive.