Can you believe that we lost two big characters one after the other like that? Fear The Walking Dead isn’t pulling any punches. Coming only a week after we lose John Dorie (Garret Dillahunt) to Virginia’s sister Dakota (Zoe Colletti), we’ve lost Virginia (Colby Minifie) too. We’ve been with Virginia for almost two seasons now, and she’s certainly been a threat. She almost won actually, when she nearly succeeded in taking out Morgan! Thankfully, Dakota saved him. Still, it was shocking that we had two deaths only a week apart. Not to mention the fact that it was June who did it while getting justice for her husband. Then she just left! Now, she’s saying goodbye to the cast! 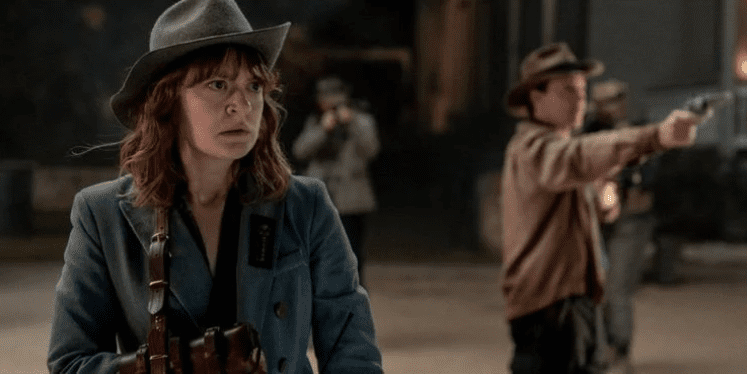 Minifie took to Instagram to say goodbye to the cast after the episode aired. It’s actually an incredibly kind and sweet message. She must have gotten close to the rest of the cast while they were filming. I may have had no love for Virginia, but Minifie will be missed on the show. She made a pretty great villain, one of the best of the show for sure.

The secret is out so now I’m spamming you all with appreciation posts but jeepers creepers this cast is good. @thereallenniejames literally carried me through every scene of this epi. thanks for blaming me for that loud goat fart. @jennaelfman thank you for welcoming me wholeheartedly from day one through to the end and for sticking with me during my bouts of perfectionism. @zoecolletti, the best tv daughter a girl could ask for, thanks for being f-cking THERE for me every damn take. @alyciajasmin [Alycia Debnam-Carey, Alicia] my love, what is there to say but thank you? @kingofbingo [Colman Domingo, Strand] renaissance man, constant inspiration, and laugh factory. @austinamelio [Austin Amelio, Dwight] I could watch you all day. @that_mo_collins [Mo Collins, Sarah] my lady of ladies and comedy queen and swimming buddy. @karendavidofficial [Karen David, Grace] I miss hiding my hand in your pregnant belly and I hope your head is ok. @danaygarcia1 [Danay Garcia, Luciana] you special human I miss you, you’re wonderful. @ruben.blades [Ruben Blades, Daniel] icon and excellent barber I’ll see you in NY! @maggiegrace [Maggie Grace, Althea] thanks for all your wisdom. @garretdillahunt [Garret Dillahunt, John] what an icon thank you for making me a better actor. @alexanisenson [Alexa Nisenson, Charlie] the sweetest girl in all the land. @colbyhollman [Colby Hollman, Wes] my Colby cheese of cheeses you rock. @christineevangelista [Christine Evangelista, Sherry] you beauty thank you for your kindness. @darylchillmitchell [Daryl Mitchell, Wendell] I miss you man! @craignigh [Craig Nigh, Ranger Hill] you made Ginny what she is. Thank you for being my right hand 😉 @hollycurran11 [Holly Curran, Janis] gorgeous lady thanks for walking the walks with me. And @baileygavulic [Bailey Gavulic, Annie] and Peter Jacobson [Rabbi Jacob] and @bobbie_grace [Bobbie Grace, Ranger Samuels] and every actor who made Lawton sing, I love you.

Ian Goldberg, one of the showrunners, also discussed Ginny’s death with Decider. “The battle between Morgan and Virginia has been brewing since Season 5, but in a more stark way since 601. When Morgan threw down the gauntlet and said, ‘Morgan Jones is dead, you’re dealing with someone else.’ Now we knew this conflict was coming, but we also knew that there is another threat out there, independent of Virginia that we’ve been teasing since that episode as well, which is these people that are spray painting, ‘the end is the beginning.’ So just in terms of structure, we knew that the middle of the season was going to be where Virginia was going to meet her end and this other threat would rise to the forefront.”

With Virginia gone Fear The Walking Dead is set to introduce a new villain. One who may have ties to John Dorie and his past, if you ask certain fans! Did you enjoy her goodbye to the cast?