Bruno Mars was the latest guest to star on James Corden’s viral hit ‘Carpool Karaoke’ and it did not disappoint. Bruno and the Late Late Show host sang their way through a dozen of Bruno’s biggest hits and new songs such as “Grenade,” “Locked Out of Heaven,” “Uptown Funk,” “Perm,” “Versace on the Floor,” and “If I knew.”

While discussing Bruno’s signature style (which includes a lot of silk) we learned that Mars can pull off almost any type of hat while James cannot. 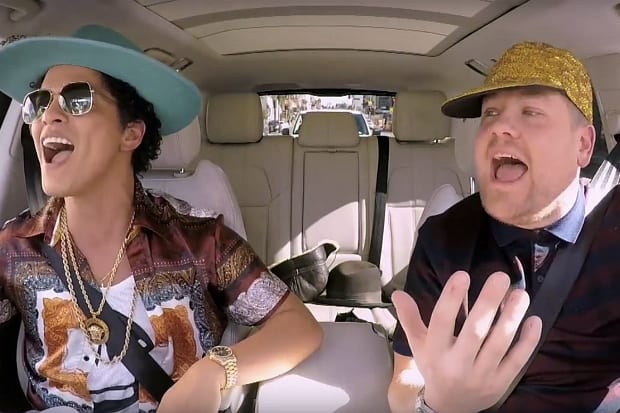 Mars also revealed that he knew he wanted to be a performer at the age of 4 after impersonating Elvis Presley. He then broke into “Jailhouse Rock” for your viewing and listening entertainment.

The two also talk poker faces,  whether or not we will ever have ‘Fat Bruno’ and what Bruno needs in his dressing rooms at all times.

Watch the whole sketch below!