Miles Teller has spoken out about a meeting with Prince William and Kate Middleton that went horribly wrong. The actor revealed his encounter with the new Prince and Princess of Wales during Top Gun: Maverick‘s London premiere in May. The subject was broached when Teller appeared on The Tonight Show Starring Jimmy Fallon last night.

According to Teller, there are a lot of “etiquette” rules when it comes to interacting with members of the British royal family. As a result, he was given a sheet so that he wouldn’t “wouldn’t f–k it up.” Unfortunately, he did exactly that. The actor stated, “Right off the bat I messed up.” However, as he explained, it was simply an unintentional blunder made and occurred when he reached for a royal hand-shake. 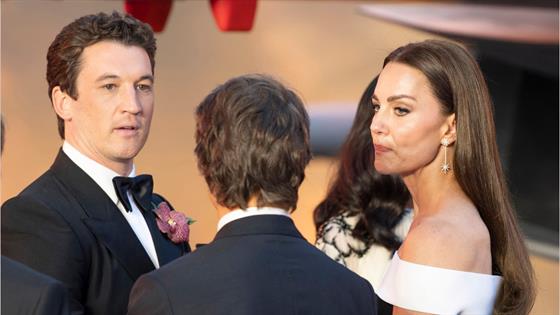 “You’re not supposed to extend your hand right off the bat unless they do. But I felt the vibe, so I’m like ‘I’m going in, I’m going in,'” Teller went on to explain that he extended his hand due to how lovely the Duke and Duchess of Cambridge were. The star concluded, “To their credit, they were very disarming. I was lost. Prince William’s eyes…Kate was beautiful and cordial, but with William I don’t know, I blacked out.”

In the end, Teller said that the meeting went well despite his royal faux pas. He told Fallon, “I think he’s a lifelong fan now. I was just picking up what he was putting down.” William, Kate, and the cast of Tom Gun: Maverick were all dressed to impress for the movie’s May 19 premiere in London. PEOPLE reported that William wore a classic black tuxedo while Kate wore an elegant black, floor-length Roland Mouret gown with a white off-the-shoulder neckline.

Even though the duke and duchess attended the event, it wasn’t the first time that they saw the flick. They were reportedly treated to a special screening of the film by star Tom Cruise after he heard that William was a fan of his work in movies. At the premiere, Cruise even remarked about his connection with England’s prince, per My London. “We have a lot in common. We both love England and we’re both aviators, we both love flying.”