Long before he became the symbiote known to many as Venom, Eddie Brock lived a completely normal life. He worked as a starving journalist in New York City and was doing pretty successful… that was until he was completely humiliated by Peter Parker aka our friendly neighborhood Spider-Man.

In Sony Pictures Venom adaptation, directed by Ruben Fleisher, Tom Hardy has taken on the role of Eddie Brock. Not only will he be taking to the streets of  New York, he will also find himself facing off against Carnage. Carnage, who is actually Venom’s offspring, is equally as (if not stronger) than Venom himself.

This past weekend, Hardy tweeted a photo from the set declaring himself as ‘wrapped’. 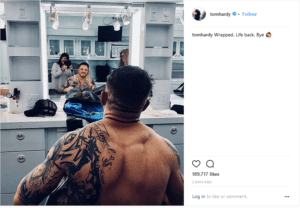 Written by David Michelinie and drawn by Mark Bagley, as well as Ron Lim and Sam Delarosa, the movie is inspired by “Venom: Lethal Protector”, a six-episode limited series that notably reinvented Venom from a Spider-Man villain to a Marvel Comics anti-hero. In it, Venom moves from New York City to San Francisco after coming to an agreement with his former foe Spider-Man. (IGN)