The Pokemon: Sun and Moon anime has brought a lot of big changes to the 20 year old series. From Ash enrolling in Pokemon Trainer School – about time – to Team Rocket FINALLY beating Ash fair and square in a Pokemon battle, this is the ‘newest’ anime we’ve seen for the Pokemon series in years. Even the animation style has undergone a drastic change – for better or worse. Though despite all these changes, there seems to be one series staple about to return … or should I say two? 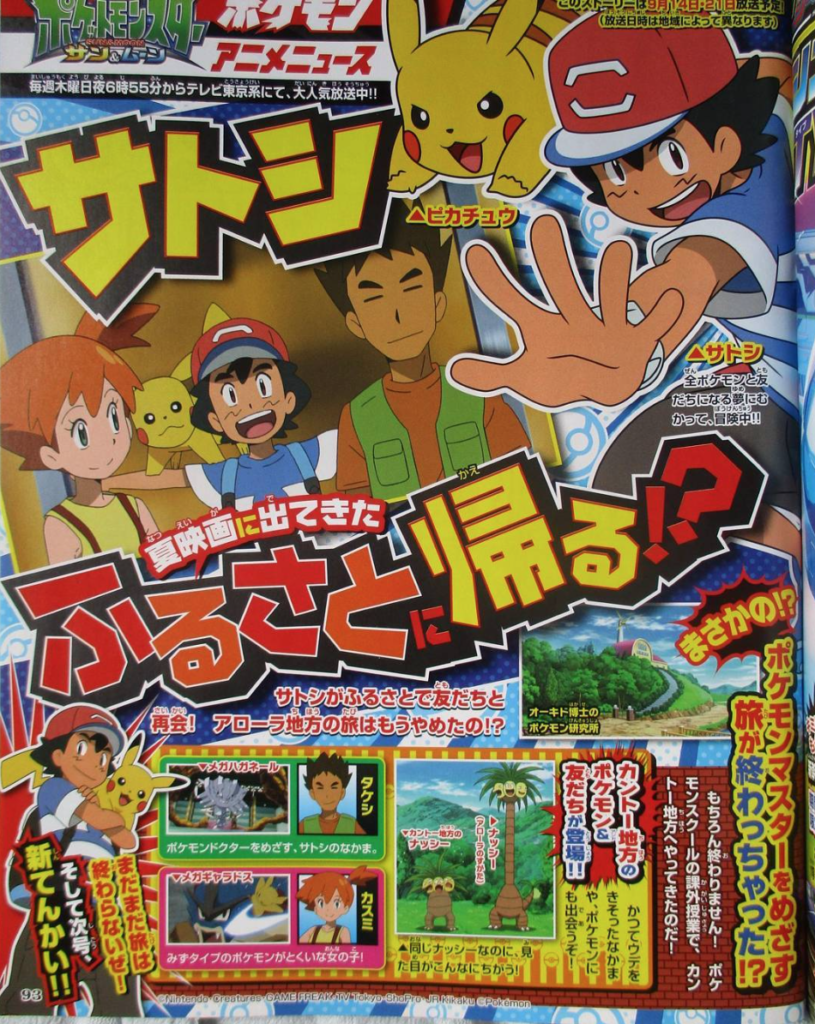 That’s right! Brock and Misty are returning for a special two-episode mini arc in the Pokemon: Sun & Moon anime where Ash returns to Kanto. As you know, Ash, Brock and Misty were the original traveling trio so having the gang back together is huge! That being said though, since each Pokemon series is an odd amalgam of reboot/ not a reboot, this return continues to confuse the continuity a little bit. After all, if the Ash in this anime is truly the Ash we met 20 years ago (1) Why is he still 10 years old (2) Why is he still so bad at Pokemon?

These might be questions better left for a future Theory Thursday article, so right now let’s just focus on the joy of having these series staples back for two episodes! The two episodes in question will be:

These episode titles confirm what was learned in the original CoroCoro Magazine feature that showed Brock and Misty now with Mega forms of their strongest Pokemon – Mega Steelix and Mega Gyarados. It’ll be interesting to see how this battle plays out though since video game wise, Pokemon has been quickly distancing itself from Mega Evolutions, which were just introduced last generation.

Not only did the Pokemon Sun & Moon video games not introduce any new ones, but also gave Pokedex entries for Mega Forms that focused on how cruel they were to the Pokemon – and possibly fatal to their trainers. So unless they plan on making a return to Mega forms, I’m willing to bet Ash’s mostly unevolved Z-Move Pokemon will defeat the full powered Mega evolved Pokemon. You know, a visual way to say “we’re done with all that other stuff”

Though there is one part of this news that is incredibly exciting for those who follow/ make Fan Art. Earlier this year, an artist by the name of Rica Diaz made a piece of Fan Art imagining what it’d be like if the original Pokemon series continued into this new Alola art style. The image went viral and some people actually thought/ hoped it was an actual screenshot.

In this regard, having Brock and Misty returning (and looking almost exactly like how the artist pictured them) is an incredibly exciting and surreal experience for fans – and probably even more so for the artist herself! Though to be completely honest, I personally like Rica’s version better as it truly captures the original group dynamic and also takes some liberties updating their wardrobe! But who knows! Hopefully the team returning also brings back the team dynamic.

Regardless, I’m super excited to see Brock and Misty back. This new Pokemon series has had a lot of fun standout moments – again, Team Rocket beat Ash and actually got teary-eyed – and I just might get back into it full time if they keep these fun throwbacks coming.