We are going into our sixth episode of season eight of The Walking Dead and we are still just one day into this “All Out War”. Just one day. Don’t get me wrong, some of the aspects of this day have been interesting. Everything that’s happened with King Eziekel for example, who was at the center of this season’s best episode, and the hints of a power struggle within the Savior’s compound, but other than that The Walking Dead has been a bit frustrating this season. There’s room for expansion on the Rick and Daryl curfuffle and I’m sure that something is going to happen over at the Hilltop with the Savior captives but for the most part The Walking Dead is doing what The Walking Dead always does… slowly giving out story. Even something exciting like another appearance of the helicopter is diminished because I’m losing trust in the showrunners to deliver on the story.

You would think with last week’s episode bringing everything current within the timeline that we could maybe move on to a new day within this war. Hell, I’d be happy if we moved a couple of weeks into the future if only to prove that this war isn’t just a battle, but it seems that we’re going to ride this day out all the way to the midseason finale. The Walking Dead will continue to draw out this 24 hours as Rick looks to head over to the Trash People, a group that clearly can’t be trusted, and try and strike another deal. Why though? If we already know that these Trash People are going to take the best offer thrown their way then why even waste the trip? Negan proved that he was one step ahead of Rick when he made them a better offer, who is to say that this couldn’t happen again? Everything about this trip seems sort of foolish to me.

Speaking of Negan, he’s back inside the Savior’s compound and reasserting his leadership amongst his people. Even though he was gone for only a couple of hours it seems that the Saviors are unable to operate without him. Seriously, that was a bit of a mess considering that Negan was off the board for short period of time. Things fell apart fast as it seems that there might be a bit of power struggle coming up between Negan and Simon. I would hate for them to use this power struggle as a way to turn Negan, a clear crowd favorite, into a “good guy”. The character deserves better than that. I’m sure that’ll be a story that remains on the back burner for awhile which means we’ll be able to focus on Negan’s pursuit of the rat within the Saviors ranks. He clearly believes it’s Eugene, and why shouldn’t he, but Eugene has pieced together that Dwight is the mole. This could be a real opportunity for Eugene to show his true colors. Is he really Negan or does he still want to see Rick and Company succeed? 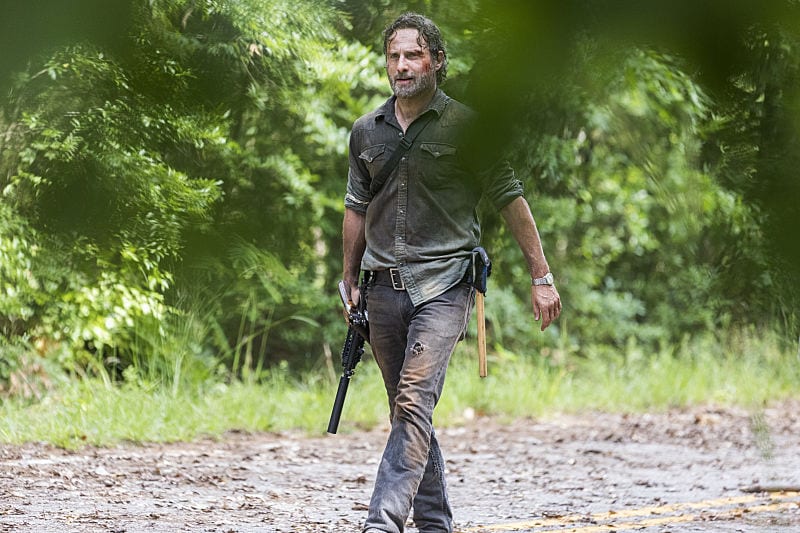 Over at the Hilltop, there are a number of captives and very little place to put them. I’ve been very vocal at how dumb it is to have this argument at this time, and I’m sure it’s going to backfire in the faces of Jesus and Maggie (who I’d hope would be smarter). Especially when you consider Gregory is walking around the Hilltop and we know that he’s already pledged allegiance to Negan. It’s not too far-fetched for him to free the Savior captives in an attempt to seize control of the Hilltop again.

Over at the Kingdom, we have a King who doesn’t want to be King anymore. The realness of war has hit home pretty hard for Ezekiel as he understands that this is not a game. The majority of his soldiers are dead, not Jerry though, and the Kingdom seems to have been taken off the board. Luckily they still have Carol, a one-woman army, who I suspect will help shake the King out of his funk.

How about Alexandria? We haven’t been there since the start of the season which means important characters like Carl and Michonne have been on the sidelines all season. If the teaser scene is any hint then it appears that we’ll be catching up with these characters tonight thankfully. Something that seems way overdue.

There are a number of other loose threads floating around as we head to the midseason finale. Daryl is still in “I want to kill them all mode” and might find a friend in Tara. Father Gabriel looks to have been bitten or scratched by a walker which means he’s on borrowed time. With his last few hours, Gabriel looks to breakout the Hilltop’s doctor from the Savior’s compound with the help of… Eugene? And what about this helicopter that has popped up time and time again? Who is flying this thing? Is this the foreshadowing of a future storyline? Does it have something to do with the crossover character from Fear the Walking Dead? I don’t know, but with the way story structure on The Walking Dead goes I’m sure it’ll be awhile before we find out.

There you have it Geeklings, a new episode of The Walking Dead is on tonight. What are you most looking forward to? Have you been happy that this season has just been one day? Has “All Out War” underwhelmed you? Do you think Rick can strike a deal with the Trash People? Are you happy to see Michonne and Carl again? Is there a power struggle with the Saviors? Sound off in the comments below. As always if you’d like to talk more Walking Dead you can find me on Twitter @iamgeek32. Happy viewing!

Home » Featured » The Walking Dead Preview- “The King, The Widow, and Rick”