Season eight has promised us an all-out war and that’s exactly what it’s been giving us. Granted, the war we’ve been seeing is one battle played out of the course of a number of episodes, because The Walking Dead tends to slow burn everything, but we were promised action and we’ve been given it. Not all of the episodes have worked, sacrificing substance for explosions, but we do have a number of possible conflicts besides the war with Negan going into the season’s fourth episode.

Let’s start with King Eziekel and his poor leadership qualities. I don’t mean that in the way that people won’t follow him, the problem is they follow him blindly, and it’s now resulted in the deaths of a number of his party. I just don’t think Eziekel has treated this war with the gravity it deserves, playing it off like a game of live action role play, and might have watered down the consequences of their actions. You know, like dying. We had to know with Ezekiel’s constant reminder that they hadn’t lost one person that something was going to go down and that something was walking right into a Savior’s trap. Having think they’ve cleared an outpost of all the Savior’s, Eziekel and the Kingdom start to celebrate and then get light up by the Savior’s who were hanging back in the building. Kingdom members start getting picked off left and right, so much for those perfect numbers, and the realness of the situation comes crashing down hard on the King. You may have a tiger but there needs to be some sort of strategic intelligence when going into battle, and that’s where Eziekel suffers. Now you have to wonder how the Kingdom will respond after losing some of their own, dear God don’t let it be Jerry, and more importantly, will Eziekel handle the loss well or realize that he’s been playing at this all wrong?

Then there’s Carol to think of because Eziekel allowed her to enter the compound without scoping it out for survivors first. Now Carol is heading into the lion’s den so to speak, and while she’s a one-woman army, one has to be slightly concerned for her chances. If Ezekiel’s poor leadership ends up getting Carol killed we’re going to have a massive problem on our hands. And if she survives I fully expect her to give the King some serious static for his behavior. I’ve been surprised that she’s allowed it to go on for as long as it has. 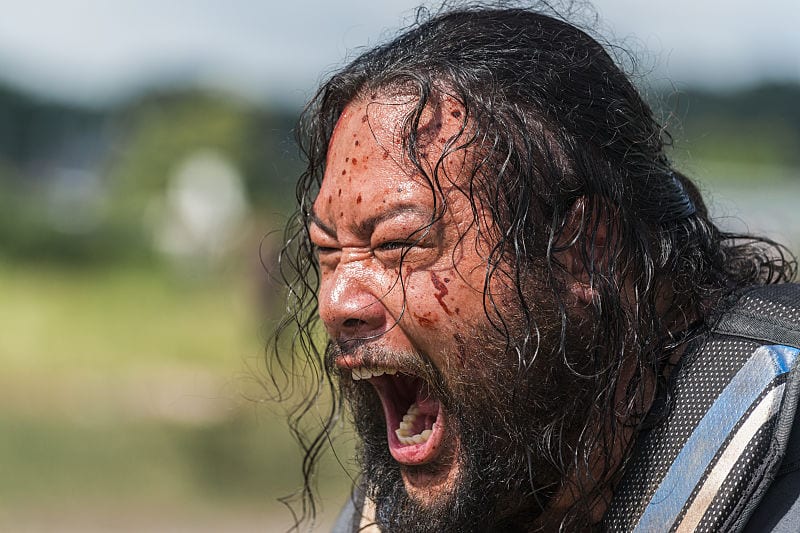 On top of that, it seems that Daryl has gone all wild dog, killing anyone and everyone. I was thankful that he put the squash on the silly return of Morales (“who cares”) but his shooting of the guy behind the tree seemed like a bit much. One has to believe that Daryl’s actions are eventually going to cause a problem with Rick, who constantly has to force himself to act humanely. I get it though, Daryl feels he has a lot to atone for with his actions getting Glenn killed and he was captured eating dog sandwiches in the compound for a long time, so I get his anger. At some point though he’s going to need to check that anger and put the cause on the forefront opposed to his personal revenge tour.

Outside of that everything involving Jesus, Morgan, Tara, and Maggie is beyond frustrating. Morgan has snapped, not in an interesting way either, and has suddenly become the Terminator wishing to kill anything that might possibly be a Savior. Jesus feels, suddenly, that maybe they shouldn’t kill everyone and it’s causing some serious strife with Tara who may be driven by revenge but has a point that the people shooting at them will never want to live side by side with them. It’s the people who are not shooting that you have the chance of convincing. Then there’s Maggie accepting these prisoners of war and allowing Gregory to remain on the Hilltop. I’m sorry, I understand Maggie’s rationale here, I think, but letting Gregory back in is beyond dumb. Here is a guy who has proven time and time again that he can’t be trusted and is only out for himself and most recently tried to make a deal with Negan, but sure, let’s give him another chance. Can’t help but shake my head at this entire storyline thus far.

Oh, I almost forgot! There’s another baby on the show now. That should be all types of fun.

Remember when Negan and Michonne used to be on this show? Yeah, me too.

There you have it Geeklings, what do you expect out of tonight’s Walking Dead? Who among the Kingdom soldiers survived? Is Carol in deep trouble? Will Daryl be able to calm himself down or is he going to be a problem? Are you just as frustrated as I am with the whole Hilltop storyline? Sound off in the comments below. As always if you’d like to talk more The Walking Dead with me then you can find me on Twitter @iamgeek32. I’ll see everyone back here tomorrow evening with my episode review. Happy watching!