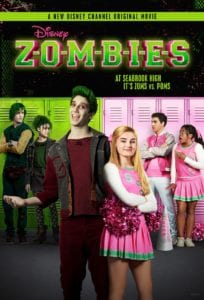 What happens when you cross ‘The Walking Dead’ and the Disney Channel? A zombie-themed musical, of course. The Disney Channel‘s newest movie ‘ZOMBIES’ will premiere on the network on Friday, February 16th at 8:00 p.m. This is what we know about Disney’s newest musical. 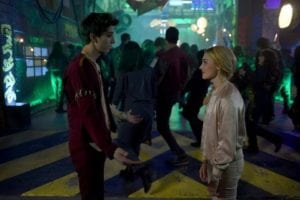 Welcome to Seabrook a small town with tradition, football and cheerleaders as their way of life. However, the local high school is turned upside down when students from Zombietown High are forced to start attending Seabrook High. Of course, being a Disney movie there will be the moral compass students such as Addison (Meg Donnelly) the head cheerleader at Seabrook and Zed (Milo Manheim) who is a zombie football star. Their friendship and music, of course, will inspire change in their friends, school and community.

The Disney Channel has had several teen inspired musicals such as ‘High School Musical’ and ‘Descendants’ and even in ‘Halloweentown High’ we learned that we can all get along if we open our hearts to others and our ears to music. Speaking of music, the ZOMBIE’S soundtrack will also be available from Walt Disney Records on February 16. 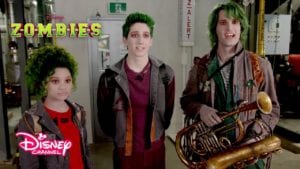 You can check the trailer that ew.com released to take a sneak peek at the ‘ZOMBIES’ trailer.

Ridley Scott in talks to Develop a ‘Merlin’ Saga for Disney

Disney Announces the Cast of the Upcoming Adaptation of ‘Artemis Fowl’