MAD TV is ready to return to your TV this summer!  Back in April, we reported that The CW had picked up eight hour-long episodes of the sketch comedy show which previously aired on the Fox Network from 1995 through 2009.

The original series launched the careers of many actors now considered household names such as Alex Borstein, Nicole Sullivan, Orlando Jones, Keegan-Michael Key, Jordan Peele and Ike Barinholtz and, the rebooted series is hoping to do the same.  The new cast consists of all newcomers with original cast members scheduled to make guest appearances. 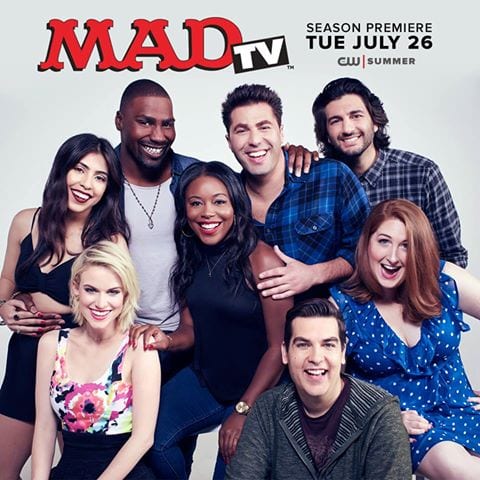 Chelsea Davison is a sketch comedy writer and performer based in Los Angeles, known for her work on MTV, UCB and YouTube. She is currently a writer on the hit Comedy Central show @Midnight and was named a “New Face” at the prestigious Just For Laughs Comedy Festival in Montreal.

Jeremy D. Howard is known for his larger-than-life characters and improv skills. He has been in several independent films and has appeared in several commercials. An athlete and former choir director, He participated in the CBS Diversity Showcase earlier this year.

Amir K is well known for his stand-up comedy appearances around the world. Born Amir Kamyab, he is an Iranian-American performer who has appeared on Last Comic Standing and Jerks with Cameras, in addition to a role in the Academy Award-winning film Argo.

Lyric Lewis is a member of The Groundlings Main Company and was featured in the 2015 New Faces: Characters showcase at the Just For Laughs Comedy Festival. A cast member in the 2015 CBS Diversity Showcase, her past acting credits include Brooklyn Nine-Nine and Drunk History.

Piotr Michael is a versatile impressionist, improviser and actor. A regular contributor to “The Howard Stern Show,” he is known for his impersonations of celebrities such as Simon Cowell, Arnold Schwarzenegger, Charlie Sheen and Donald Trump.  His voiceover work includes Disney’s Wander Over Yonder, Conan and Real Time with Bill Maher, as well as video games Final Fantasy, Call of Duty and Warcraft.

Michelle Ortiz studied at the prestigious Moscow Art Theatre School in Russia and trained as a classical opera singer in Germany. Ortiz participated in the 2014 ABC Diversity Showcase and the 2016 CBS Diversity Showcase. Her television credits include Marvel’s Agents of S.H.I.E.L.D and Life in Pieces.

Adam Ray is a comedian/actor best known for his roles in The Heat and Spy. He is also featured in the upcoming reboot of Ghostbusters as the voice of the iconic character Slimer, and currently co-hosts the new TBS comedy game show Separation Anxiety. His comedy sketches have garnered over 30 million views on YouTube and Funny or Die.

The new Mad TV series is set to premiere Tuesday, July 26, at 9pm EST on The CW.

Will you be watching?