If you have a Netflix 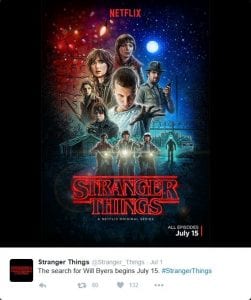 account you’ve already seen the ad for “Stranger Things” front and center of the home screen. The spooky teasers show you spinning bike tires, an incredulous Winona Ryder and men in suits. The preview of these scenes call to the 1980’s dramatically, an era beloved by the Duffer Brothers who created the series. They drew inspiration from their idols such as Spielberg and Stephen King to bring life to a story line that has been dubbed as slightly unoriginal but effectively elicits the question if something hasn’t “gone awry in middle America, a question that is as relevant to 2016 as it is to 1983, the year in which the drama takes place” (Ryan, 2016). There is high concentration in the recent online conversations about the tone and horror built into “Stranger Things” but not so much about the conspiracy theory. It’ll be exciting to watch how far that develops.

The Duffer Brother s have had a lot of fun in these last few weeks leading up to the debut with hosting screenings. They “aren’t in the league of the filmmakers they idolize” (Ryan, 2016) but they are enjoying favorable feedback from those lucky enough to attend the pre-Netflix premieres.

Posted reviews and coverage of this new series can’t say enough about the nostalgia connected with this film; it is evident in the released photos and logo artwork. With all the hype going into the series, which airs July 15, it’s nice to see the people who have influenced it are having just as much fun as the Duffer Brothers.

‘Stranger Things’ is out today on Netflix, check out the first 8 minutes of the pilot here – it’s pretty spooky.