Alfie Allen Brings His Dog to the Game of Thrones Panel

Be the Alfie Allen holding a puppy at the Game of Thrones #SDCC panel you wish to see in the world pic.twitter.com/Bq2GgUsN9d

Allen who plays the tormented Theon Greyjoy on the show brought his adorable dog Abby on stage for the panel. She sat perfectly in his arms the whole time, completely stealing the show, which is saying a lot considering the cast of Game of Thrones was up there.

Alfie Allen has a dog on stage. Her name is Abbey and she's wonderful. #GameOfThones #SDCC #HallH pic.twitter.com/fwL1TqTwRJ

The Stranger Things season 2 panel kicked off with an amazing trailer for their new season, which got the crowd excited and ready for an hour of surprises. So, to kick things off panel host Patton Oswalt opened up the floor for fan questions and none other than Emmy nominated Shannon Purser (who played Barb) ask the first question.

What did she ask? Will Barb be in Season 2? Unfortunately, David Harbour, who plays Chief Hopper, said “No, but there will be justice for Barb. Barb will be avenged.” 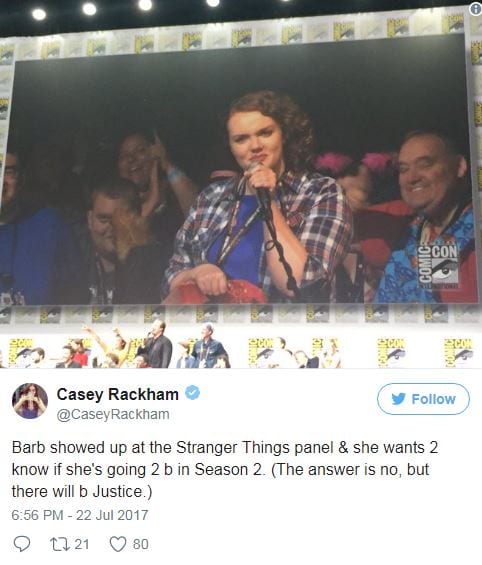 Barrowman, who plays  Captain Jack Harkness in Doctor Who and the spin-off Torchwood was the host for the Dr. Who panel and wasted no time bringing attention to the news that for the first time ever the Dr. will be played by a woman. He entered the panel wearing a blue dress that was designed after the tardis while singing Barry Manilow’s “Copacabana”.

John Barrowman is a national treasure.

The Black Panther cast reacting to the SDCC footage

It’s hard to tell who was more excited about the exclusive Black Panther footage that was shown at SDCC, the audience or the cast? After the panel video began to surface showing the cast completely freaking out over what they just saw. How great is it to see a group of people so proud, passionate and excited about the work they did? It just makes you want to go see it even more!

Kansas opened for the Supernatural Panel

Looked who showed up to support the Winchester’s and their rabid fan base? Kansas gave a surprise performance of the Supernatural staple “Carry on My Wayward Son” to kick off the panel and as you can imagine the crowd went crazy. A perfect example of the expect the unexpected way of SDCC.

Aquaman’s Jason Momoa and his trident take over Justice League

Momoa kicked off the Justice League panel the way you’d expect Jason Momoa to…huge! His energetic and amplified entrance started in the back of the room where he ran all the way up to the stage waving Aquaman’s trident in the air shouting, “The King is here!” to the 6,500 fans in Hall H.

The Night King Showed Up to the Game of Thrones Panel

You never know what you are going to get with fan questions, but one dude at the Game of Thrones panel did not disappoint. He showed up dressed as the Night King and quietly asked the cast if they were “looking forward to rising again as the Children of the Cold.”

Norman Reedus Getting Emotional at The Walking Dead panel

While answering a fan question, Normal Reedus took a moment to share how much The Walking Dead and The Walking Dead family means to him and the cast. “‘I’m sitting here and I’m listening to these questions and everything else and getting wrapped up in all this stuff and looking at that retrospective over here, I’m almost tearing up. I’ve gotta say, this has been such a good experience for all of us and we’ve always had each other’s back and had your back and you guys have our backs and it’s been fantastic. It still is fantastic.”

There’s nothing that warms your heart more at a convention than seeing the diehard fans in their cosplay. It’s truly such a special and safe place where people can be themselves (while pretending to be someone else) and 2017 was truly impressive! Check out some of the cosplay from day 2 and step up your game!

Home » Fandom » SDCC: Heartwarming and Funny Moments From the Con You May Have Missed