Some of the cast and creators of Fox’s new paranormal buddy-cop series, Ghosted, stopped by San Diego Comic-Con to give anxious fans a look into the new show and a new teaser trailer.

The premise of the series finds the unlikely pairing of Leroy Wright (Craig Robinson) and Max Allison (Adam Scott) to investigate paranormal occurrences in Los Angeles. Wright is a former LAPD detective and paranormal skeptic while Allison is a professor and renowned multiverse researcher whose reputation was tarnished when he began insisting that his wife was abducted by aliens. When an agent disappears, he contacts the Bureau Underground, a secret paranormal investigation organization, telling them to contact Wright and Allison. The two partner up and begin an adventure that neither of them signed up for filled with things that neither could have ever imagined.

Stars Craig Robinson, Adam Scott, Ally Walker (playing Captain Lafrey of the Bureau Underground), and series creators, Tom Gormican and Kevin Etten, all came to SDCC to premiere Ghosted, and to talk about both the shows inception and where they’d like for it to go. They also showed the lucky audience an advanced screening of their pilot! 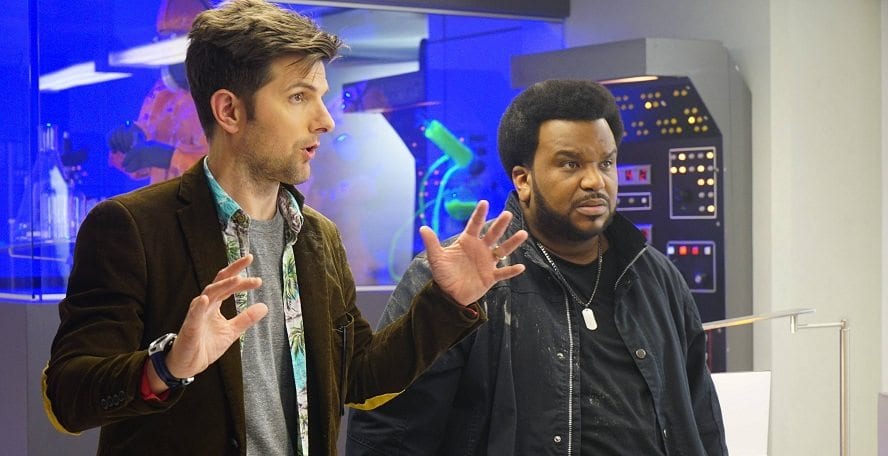 Here are some of the things that we learned!

The show begins and takes place in Los Angeles, but Etten and Gormican are hopeful that it will be able to travel as the series and mythology develop saying, “We love LA. It has this timeless quality. Pretending things that are familiar to you could also be something paranormal was also a fun idea. But we’re also hoping that the show will span the country and be in different places all the time.”

What kind of storytelling should you expect?

Expect to see a combination of the “monster of the week” episodic device combined with an overarching story throughout the season. They also talked about how Leroy and Max will get to explore the “multiverse”. If you’ve ever seen shows like The Flash then you know that this means they could potentially be meeting different versions of themselves.

What are these special effects going to look like?

Gormican told the audience to expect a “throwback filmmaking where we do a mix of practical effects and CGI.”

What can Ghosted be compared to?

Everyone’s favorite calzone lover Adam Scott gave this lovely analogy when discussing the show’s influences. “If Stranger Things and Midnight Run had a baby, that’s Ghosted. For me, that baby would be my favorite baby.”

Is the show only going to be about ghosts?

Gormican admitted that they thought the name was super cool and fit in well with what they wanted, but in actuality, there aren’t any ghosts in the pilot. Etten was sure to clue in audiences that ghosts will definitely be one of the paranormal beings on the show, but expect to also see werewolves, aliens, zombies, or even a Yeti!

The show is going to have a good balance.

The whole panel made sure to point out that they have been working hard to give you a well-rounded show of paranormal and comedy, but not a heavy dose of either. Adam Scott assured the audience that, “while editing the pilot, we often found ourselves taking jokes out. There’s a fine line there and you can tip over to silly, and then the scares won’t be scary, or the stakes of someone being chased go away.”

Overall, the pilot premiere had a great reception and people seem to be really excited about the new show and it’s potential! As of now only the pilot has been filmed but with this comedic dream team, it would be awfully surprising if the show doesn’t get a full season pickup.

Here’s the exclusive trailer they released at SDCC as well!

Home » Featured » SDCC: Adam Scott and Craig Robinson Bring the Laughs and the Scoop to the ‘Ghosted’ Panel