Comic book heroes were meant to be relateable to their readers. Unfortunately, there were no black heroes. There was black representation in comics, but they were very stereotypical to that time. Derek Dingle and Denys Cowen got into comic books when they were young and they were disappointed to see that there were no heroes that they could relate to. 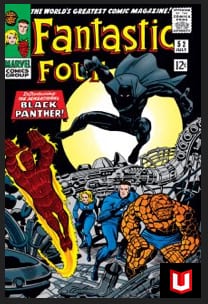 Black Panther was the first, non stereotypical black figure in a comic book. He took on the Fantastic Four and beat them. He was introduced in the middle of the civil rights movement in 1966. Luke Cage, however was the first official black superhero appearing in 1972.

Unfortunately, these comics were written by white people, who didn’t get African American culture. It didn’t help that the industry was almost completely white, and male.

Denys went to DC for a job. They “already had a colored artist…” so Marvel hired him to draw Luke Cage and Black Panther. He got to draw the heroes he read about as a kid.

Denys then got the brilliant idea to create his own comics, he got Derek, Dwayne McDuffie, and Michael Davis in on the idea. Together they created Icon and Rocket, Hardware, Static Shock, Blood Syndicate etc.. they created the black superheroes that were missing from the world. Their characters were real. They dealt with racial issues just like their writers did.

Unfortunately, no one would distribute their comics, so Denys, Derek, Dwayne and Michael created Milestone Comics in 1993. Things seemed to be going well for the group.

Denys and Dwayne would often butt heads over creative decisions. From showing safe sex on the cover to a very hateful editorial published in that issue. These arguments effected funding and Denys ultimately left the company.

To keep the company afloat, Milestone turned to DC. DC turned them down and Milestone faded away in 1997.

After Milestone comics ended publications, Static Shock was turned into a TV series from 2000-2004. This project brought Denys and Dwayne together again. The two even talked about reviving Milestone.

In 2011, Dwayne suddenly had a heart attack and a day later, he died.

The loss of Dwayne took a huge toll on the comic book universe and Denys decided to revive the company. This time, Milestone would merge with DC.

It took a while, but the absence of the Milestone characters was finally noticed. These characters and stories represented change and diversity and that was something the world wasn’t completely ready for in the ’90s, but now we couldn’t imagine a world without them.