Last week we saw the origin of Superman and the battle his creators fought. This week explores how the 9/11 terrorist attacks in New York changed how comic books are written and superheroes are portrayed.

By setting the comic books in New York, it gave a sense of realism to the stories. The characters lived in the city and faced the same trials that came with it: politics, segregation, fascism, etc…  Stan Lee himself said he chose New York as a setting because he knew the city and could write about it.

Like the twin towers, comic book heroes are larger than life. When 9/11 hit, it changed the city in real life and in comic books. The attack changed what it meant to be a hero.

Comics responded to the attack immediately. Marvel created Heroes and A Moment of Silence as a response recognizing that heroes were all around us. In December 2001, there was a Spider-man comic where he was at Ground Zero, witnessing the tragedy. Doctor Doom even shed a tear. These comic book issues brought the civil heroes to the forefront. The civil heroes were first to the scene and the superheroes kind of stayed back to process the attack.  People needed these stories to cope. 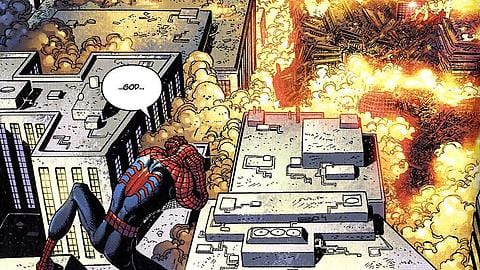 The first Spider-Man movie, starring Tobey Maguire featured the twin towers in a teaser. The movie itself revolved around patriotism and the teaser was taken down.  Peter Parker reminded Americans that they needed superheroes after 9/11. America needed a hero to swoop in and save the day.

Comic book heroes reflected the people and vibe of the country. The comics stepped up to remind people that they aren’t alone in what they are feeling. In 2002, Captain America was resurrected into this scared and powerless nation. He questioned the government just like Americans were and he wasn’t quite sure what side he should be on.

In 2004, Marvel brought all of their characters together to battle a giant villain that needed the whole universe to be destroyed. Mark Millar used the unrest in the country to create Civil War. Because right and wrong were no longer easily distinguishable, it divided the Marvel Universe, much like the Patriot Act divided Americans.

Civil War didn’t answer who was right and who was wrong, it ended with Captain America’s death. His death brought back the emotion of 9/11 and that there bigger problems. 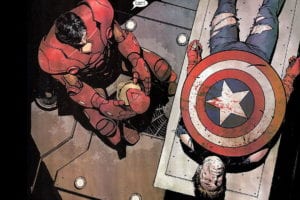 2008’s The Dark Knight gave us Gotham City that seemed to spiraling downward as a new breed of villain was forming. Heath Ledger’s Joker was different than those before him. He brought mayhem with chaotic terror. This put Batman in a sticky situation. The line between good and evil was blurred and Batman had to figure out how far across that line he would go to beat the Joker.

“You either die a hero, or live long enough to see yourself become the villain”- Harvey Dent

9/11 changed fact and fiction. Comic books grew up with New York. The characters are complicated and real and they feel emotionally connected to the past, just like you and me.

Comic books create hope and what could be better than setting them in the city of hope.