Tis the season to be spooky; and Pokémon Go has just kicked off its spookiest Halloween Event yet! In the past we’ve gotten double candy, new Ghost-Types and event new Lavender Town themed night music. Most of those ‘tricks’ have returned this year, but it’s the two incredible new ‘treats’ that really have us excited!

Last year gave us 3 new Ghost-Type lines with Duskull, Shuppet and Sableye. This year split things up a bit further. Whereas Gen 4 does give us quite a few new Ghost-Types, not all are present in this event. Driftloon has been released with a Shiny variant as well as the Dark-Type Stunky. So what about the other Ghost / Dark-Types Gen 4 introduces? Well the ‘ghost in the machine’ Rotom will have to wait – most likely due to its many forms – as well as the newer Ghost and Dark-Type evolutions for existing Pokémon. Although as I mentioned earlier, this event does give us two big treats and they come in the form of a new Legendary Raid Boss and Research Quest! 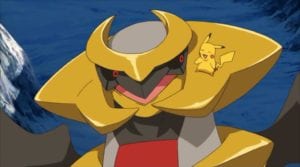 That’s right, we barely have the first 30 Pokemon of Gen 4 released and we’ve already been gifted with one form of the Dragon/ Ghost-Type Legendary Pokemon Giratina. This was the Gen that basically released Gods into the Pokémon world and for many Giratina represents the Devil of the Pokémon Universe, which makes him the perfect surprise for this spookiest of seasons! Now part of me wonders if this surprise twist was a last minute decision as there were some initial glitches with the Raids resulting in Giratina spawning that had far higher levels than usual and/or containing the stats of its other form. Then again, the Gen 4 teaser we got two weeks ago did leave us a hint of Giratina at the end. Either way, last minute call or not, it was definitely a good one!

As for the new Research Task, it’s quite a doozy; but thankfully it’s only 2-3 steps. The Quest revolves around the Ghost/ Dark-Type Pokemon Spiritomb and will have trainers doing a few things 108 times… seriously though. Why that specific number? Well you see, Spiritomb is said to be the amalgamation of 108 Pokemon Spirits. As such, Niantic made each quest step and reward revolve around the numbers 10, 8 and 108. It’s actually a pretty cool Easter Egg/ lore bite. The full quest is as follows:

It’s certainly quite the bit of a grind, but it’ll be worth it for this trophy Pokemon. It might not be good in the Meta-game; but it’s certainly one of a kind! So get out there Trainers! Keep catching! Keep walking! Keep hatching! Because if new and Legendary Pokemon aren’t enough for you, Double Candy from all sources is in affect until Thursday, November 1st. As for Giratina, it’ll stick around until November 20th; but if you want to grind for Candy now is still the perfect time for it! Happy Hunting!