You know how they always say, everyone has got a doppelganger somewhere? Well, sometimes they may not always be in the form that we expect them to be!

Recently, Norman Reedus took to social media and posted a photo of him side by side with a cat named ‘Ace’, who received a spotlight in a recent issue of In Touch Weekly. 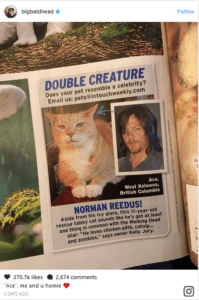 Although Reedus is a cat person, he has a dog in mind to become his pal in the hit AMC series.

“I think it would be a Blue Heeler mix, kind of a Mad Max dog. Sort of light blue with the dots, maybe two different colored eyes, and it would only answer to me, and no one else could pet it but me. I don’t want anyone to be able to pet him but me.”

As long as the doggie makes it through the zombie apocalypse and doesn’t die, we are 100% okay with this!

The Walking Dead, now in its eighth season, returns from its winter hiatus Sunday, February 25 on AMC.