When it comes to quality of film trailer, Transformer The Last Knight has been all over the map. First it had an interesting teaser, then a boring Superbowl ad and finally hit gold with the series’ first kickass female lead! So where does this new trailer fall?

Well we learn that this film does indeed have an over-sexualized female character – we knew it was coming – but we also FINALLY get some explanation to Evil Optimus.

Well since the first teaser, we could wager a guess what happened to Optimus; but seeing it is so much more rewarding. In the trailer we see Optimus being restrained while being spoken to by what appears to be our first look at a Quintesson – the makers of the Transformers. This character is called “Quintessa” – I see what you did there – and is played by Gemma Chan. Design-wise, this Quintesson look fits as it’s both wraith-like and machine-like. Beyond that, its unclear whether Optimus is on a transport ship or actually in a factory – so I’ll hold off on the “Optimus got a factory reset” jokes for now.

Either way, Optimus will be under their control for most of the film as you can see with his purple eyes. Though we know Optimus will snap out of it eventually, but this looks to be a final act moment since even the Optimus vs hordes of robots scenes still maintain the purple eyes. And what does that mean for the Megatron and other fight scenes. Are the Decepticons good here or simply fighting the more pressing threat?

Back To Normal With Everything Else:

Beyond the Quintesson story and Dragon-Transformer – which we STILL don’t have any clear shots of – the rest of this trailer falls back on Transformers film series staples – tying Transformers to significant historical events and a hot girl. Sure this time around the story seems more interesting because there’s dragons and Sir Anthony Hopkins narrating, but at some point you have to wonder why every other event in human history had Transformers be a part of it. Well apparently this film is supposed to reveal that and explain why they keep coming to Earth and influencing events…. *why does this sound familiar* 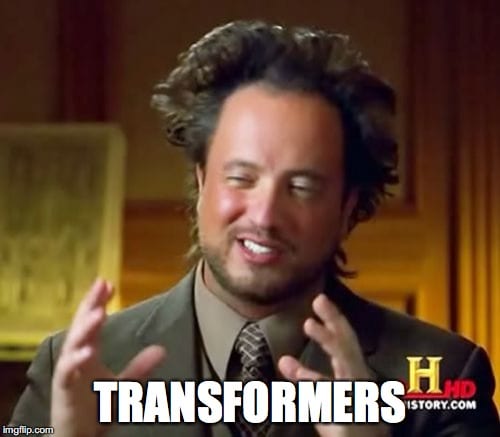 The other ‘back to normal’ aspect of this trailer was the very thing the last trailer worked against – overly sexualized female leads. Seriously, how many times has their been a female character in this series that amounts to nothing more than eye-candy love interest. Well Laura Haddock (who plays Vivian Wembley) IS indeed stunning but hopefully she’s remembered for something more than just that. As far as this trailer is concerned, she might as well just be known as “sexy scientist #1” – and of course love interest to Cade, but we saw that one coming without the scene spoiler. Though overall, with Izabella still holding down the role of badass female lead and us having a female Quintesson that controls Optimus, this is still the best Transformers film in terms of range of female roles.

How will everything else play out? We shall find out June 23rd! At least I hope we find out then. It’s not hard to figure out how 70% of this film will play out, so if they release any more trailer we might have that final 30% spoiled for us.