In case you haven’t been on social media for the past few weeks or so, there’s been a viral story involving NASA and aliens that has the entire internet buzzing!

Nope.  It’s not that story.  We haven’t found life on Mars (yet) but, NASA did put out an open call for a brand new job protecting the universe.  The position is for a Planetary Protection Officer and the job description says that NASA is looking for someone to protect Earth from, “organic-constituent and biological contamination in human and robotic space exploration.”  When NASA posted the job, they weren’t planning on getting the cutest job application EVER!

As it turns out, one little guy from New Jersey felt that he was the best person for the job.  9-year-old Jack Davis, who’s too young to probably know what a resume or job application actually is, wrote a hand-written letter to NASA expressing interest in the role.  Davis wrote:

“My name is Jack Davis and I would like to apply for the planetary protection office job.  I may be nine but I think I would be fit for the job.  One of the reasons is my sister says I am an alien. Also, I have seen almost all the space and alien movies I can see. I have also seen the show Marvel’s Agents of SHIELD and hope to see the movie Men in Black. I am great at video games. I am young, so I can learn to think like an alien.”

As if his letter wasn’t adorable enough, Davis signed the note with his name and by also giving himself the title of “Guardian of the Galaxy.”

After receiving the letter, NASA could not pass up the opportunity to respond and encourage the ambitious fourth grader to keep reaching for the stars.  The director of Planetary Science Division, Dr. James L. Green responded by saying:

“I hear you are a “Guardian of the Galaxy” and that you’re interested in being a NASA Planetary Protection Officer.  That’s great!

Our Planetary Protection Officer position is really cool and is very important work.  It’s about protecting Earth from tiny microbes when we bring back samples from the moon, asteroids, and Mars.  It’s also about protecting other planets and moons from our germs as we responsibly explore the solar system.

We are always looking for bright future scientists and engineers to help us, so I hope you will study hard and do well in school.  We hope to see you here at NASA one of these days!”

We can’t help but point out that this response, at no point, says that Davis didn’t get the job.  It certainly doesn’t sound like a rejection letter but a “come back when you’re ready,” kind of letter which is really awesome!

So, while Davis may not be old enough just yet to start protecting the universe for NASA, it’s great to know that there are little Peter Quills out there in the world, ready to take on the job of Guardian of the Galaxy!

When 4th grader and self-proclaimed “Guardian of the Galaxy”, Jack, wrote to us about applying for a job, we replied https://t.co/932pj3Q50B pic.twitter.com/RhcGdnzGAw 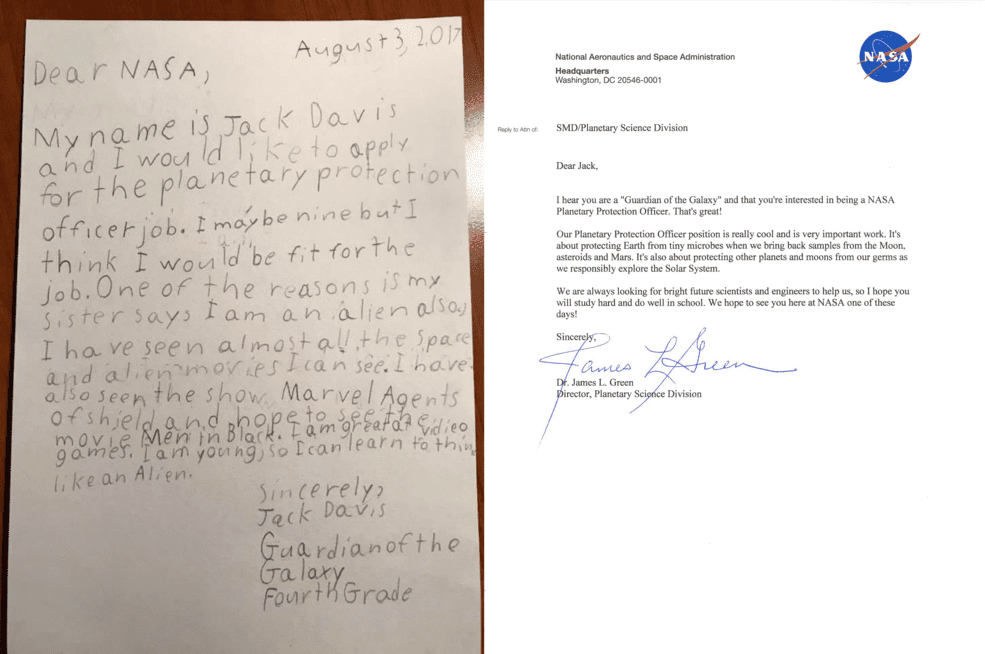