While we may still be reeling from the news of their separation, we first fell in love with Chris Pratt and Anna Faris onscreen. The two of them appeared in movies and on TV together quite often throughout their relationship. So, even though they won’t be together in real life anymore at least we will always have these movies and clips to get us through this tough time and relive the good ol’ days.

The one where it all began. Pratt and Faris first met on the set of the film Take Me Home Tonight all the way back in 2007. It starred Topher Grace and followed him as he used his older sister’s (Faris) boyfriend’s Labor Day party as a way to finally make a move on his high school crush four years after their graduation. It ended up being released into theaters in 2011, two years after the pair had gotten married.

This completely underrated rom-com starred Anna Faris and the lovable Captain, Chris Evans. In What’s Your Number, Ally (Faris) tracks down all of the men that she has been in relationships with, of which Pratt is one, in hopes that one of them will end up being her true love. In the hilarious clip above, Pratt plays an old flame nicknamed “Disgusting Donald” back in the day, who crosses paths with Ally on a few occasions looking a lot better than she remembers. 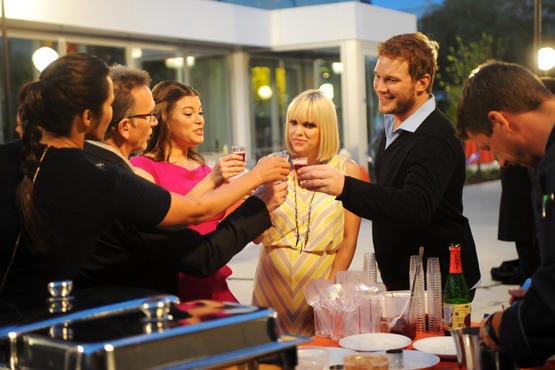 The duo appeared on an episode of Bravo’s hit show Top Chef in 2012, where the chefs were tasked with putting together a housewarming party menu for them. Faris was pregnant at the time and it was of course filled with the couple’s signature humor throughout. “Pack as many calories you can into each bite, and I think you’re going to win our heart,” Pratt said to the chefs with Faris following it up by saying “I’m pregnant, so I’m enjoying eating more than ever.” Movie 43 was a hot mess of a film. It currently holds a 4% on Rotten Tomatoes and the 2013 Razzie Award for Worst Picture. The fil was a series of interconnected short films that followed a washed-up producer as he pitches insane story lines featuring some of the biggest stars in Hollywood. It actually had a pretty all-star cast including Emma Stone, Greg Kinnear, Dennis Quaid, Hugh Jackman and Kate Winslet. Pratt and Faris played a couple in the film. You can watch the Red Band Trailer here.

Pratt gave a cute little shout out to Faris during his SNL monologue, saying that “Home is where the heart is and mine’s right here. It belongs to that hottie in the audience there.” Faris had also hosted SNL twice, which he also praised in his song.  You can watch the entire thing here.

When Faris hosted the People’s Choice Awards in 2015, people wondered if Chris Pratt would be involved in any of it as it was right around the time that he had shot to megastardom. The two put together this skit that poked fun at his growing popularity and her role on Mom alongside Allison Janney.

The pair’s last onscreen moment was when Pratt guest starred on Faris’ hit sitcom, Mom back in January. He played a romantic interest named Nick for her character of Christy. In the clip above Faris goes to visit him about getting riding lessons for her son.