Whether you’re attending the Crossover event in theaters, or watching from home-you’ll get to enjoy Morgan’s journey. We talked with him last week about Morgan’s state of mind, his upcoming journey to Texas, and how Lennie is adjusting to his new world. 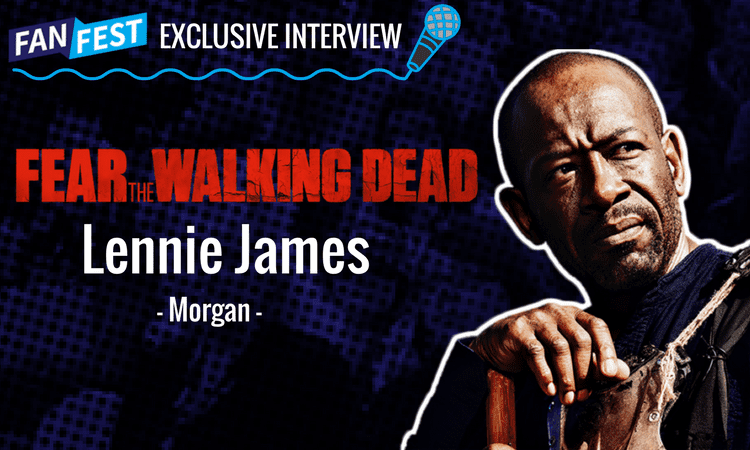 Morgan is going through this really crazy mental journey on The Walking Dead right now, and he’s becoming a little bit unhinged. He seems to even realize that he’s not really that well. Can you give us a little more insight into why Morgan needs to leave the group and start this new journey that leads him to Fear The Walking Dead?

Lennie: I think one of the things that is happening with Morgan now and is very telling in episode 814 (Still Gotta Mean Something) when he comes across Rick in the woods. We can see in his eyes that Morgan is at war with himself-let alone anybody else. And Morgan says “I’m not right.” Unlike the last time Morgan kind of lost himself, it kinda happened without him knowing and it kind of took Rick to bring him back from the brink. This time, Morgan knows what’s happening, and the price of what is happening to him, and how little control he has over it. And he knows what he’s capable of when it has hold of him. I think he feels like he needs to walk away from the group in Virginia for his own safety as well as theirs.

What is your favorite part about Morgan?

Lennie: One of the things I admire most about Morgan is his bravery. He’s not the only one that’s brave in that way but considering what he’s gone through, what he carries. Considering all that he’s done and what he knows himself to be capable of. The bravery he has to keep trying to find a civilized spirit of this new existence. To continuously go and try and find a way to walk, to meet people with an open hand and not a closed fist, even when he doesn’t want to. The way he feels about protecting other people even if that means removing himself from the situation. The bravery of his heart is one of the things I most admire about Morgan and how clearly he not only sees this world, but sees himself in this world.

In the last episode, Morgan brings up his son. Do you think that after Morgan makes his journey to the world of Fear The Walking Dead, he will still be motivated by his past and his son and his wife?

Lennie: I think they’re gonna affect him. I think they’re always going to be with him. For the first time in a long time, Morgan gets to decide how much of the pain and the loss and the memory of Jenny and Dwayne-how much of that he brings into whatever his new relationships in Fear might be. because there’s no one in Fear who knows Morgan’s history so they’ll only know by what he tells them. And that, for the first time, is gonna be in his hands. So he’ll have a degree of control over that. Should he decide to bond with people, or not bond with people, and how he bonds with people. Because in Fear, it is genuinely the meeting of strangers.

The new characters on Fear-the new and old-do you think they’ll play a role in helping him come out of his shell as his new self and be reborn?

Lennie: I suspect, particularly with Garret’s character John. I suspect that he will try. I don’t know the success he or Maggie Grace’s character or any of them will have on Morgan, but I suspect they will try. Maggie’s character, Garret’s character and Jenna’s character-I think all of them have fantastic back stories. I think that their introductions to the new season of Fear are really, really exciting. But also where we find Madison and Alicia and Nick and Strand and Luciana-where we find them and the plot kind of makes changes to their characters. I think there’s so much going on at the start of season 4 of Fear, that them helping Morgan may not necessarily be top of their lists.

How has this been for you as an actor? I feel like it’s such a crazy thing-to jump from one show to its sister show. Does it feel like a clean slate, at all?

Lennie: No. Not really but I don’t know if it could, or should to a certain extent. Because it’s Morgan and all that he carries from the last show is a large part of who he is, and that’s important to who he’s going to be in Fear. There was so little time between the end of one, and the beginning of the other-leaving Atlanta to start filming in Austin. So at the moment I’ve just kind of given up to the tide really. I haven’t tried to swim with it, I haven’t tried to swim against it I’ve just let it flow and I’ll find my footing and I’ll find where I kind of land eventually. I’m kind of getting there now. We’re a deal into shooting so I’m kind of getting there now.

But, at one point I said to Scott, “Can we find somebody, any actor who has done what was been asked of me, to do?” And we racked our brains, and there have been people that have kind of done things similar. But there hasn’t been, that I can think of, anyone that’s been established on one show, that goes over to an already existing spinoff of that show, as the same character-to go continue the story. So there wasn’t anybody I could talk to. So at the moment I’m just allowing the tide a bit to carry me along and I’m just trying to keep my head above.

Wow, well I think fans are really going to love how it turns out.

Lennie: I hope so.

And I have two more questions one will bring us back, and one will turn us looking forward to the future. So the first is, as Lennie, whose absence do you feel the most from The Walking Dead?

Lennie: I was texting with one of the cast members just yesterday saying this to them. Towards the end of April is usually when we start flying into Atlanta to get started on the new season and that’s gonna come up in about three weeks and I think it’s then that I will feel my absence from The Walking Dead.

I was on last season until the last day of filming and then as I say I had six days before I got started on Fear. It just felt like it was the end of the season and I had gone on to do another job and it’s been so all consuming that I haven’t really had time to think about not being on the other show. But that’s gonna become real in a couple of weeks. I think that’s when I’m gonna feel it and that’s when I’ll kind of start missing the faces. There’s no many of them that I’ll miss. It would be unfair for me to say who and how and why, but the usual suspects. There’s also members of the crew who are very much part of the experience, and the moment I see them I know that I’m in that home. Not seeing them is gonna be very tricky this year.

I bet it will be. My last question for you is, what should fans prepare to see from Morgan during season 4 of Fear The Walking Dead?

Lennie: They should prepare to see Morgan kind of evolve in ways that might not have been possible in the shadow of Rick. That’s not necessarily me saying it’s a good thing or a bad thing. But I think he’s gonna have to start making decisions for himself and deal with the consequences of those decisions on his own and in a way that he hasn’t necessarily had to do before. He’s got to decide not just who he is to himself but also who he is to this new group of people. That’s gonna be challenging mostly because who he may evolve into is not someone that he himself knew he was capable of being.

You better believe we’ll be watching it in theaters!