It’s not hard to admit that while the Savior’s are actually the worst, they do have some of the best characters that we’ve seen in a while. Take last night’s episode “The Big Scary U’ which found Negan, Gregory, Dwight, Eugene, and Simon all together in the conference room trying to figure out what transpired in Alexandria in the Season 7 finale.  Even though they are all so vastly different, putting these five guys in a scene together made for some great television and a pretty entertaining (and long!) cold open.

Every week Josh McDermitt, who plays Eugene, writes a brief recap of each episode for EW and this week he provided some insight into what it was like teaming up with all of those guys and shooting that flashback scene. 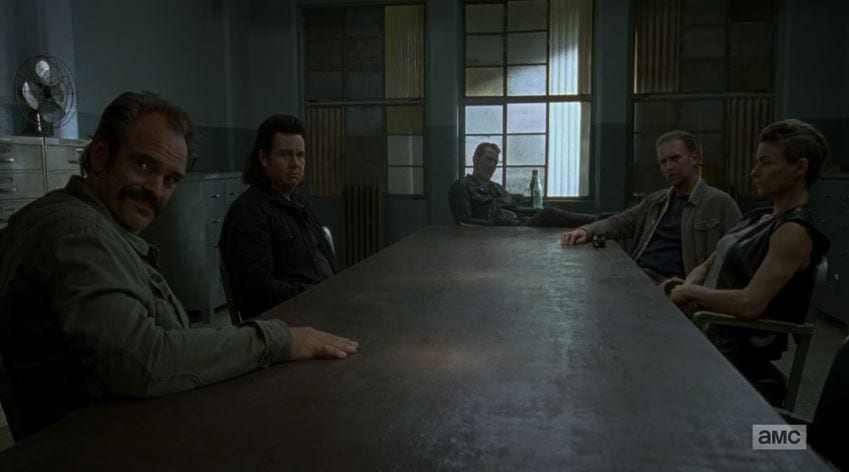 Being locked up in a conference room with Jeffrey Dean Morgan (Negan), Austin Amelio (Dwight), Steven Ogg (Simon), and Xander Berkeley (Gregory) is some of the most fun I’ve had on this show in the five seasons I’ve been here. These guys are a bunch of goofy idiots and never fail to make me laugh. I don’t break into laughter during scenes, but I couldn’t keep it together during this episode.

Xander Berkeley changes up the way he does his lines for Gregory during each take and it’s so unpredictable. He’s not doing it to get a laugh, he’s just really good at playing that slimy character and has the freedom to move around a bit in his performance. And then a stifled laugh or snort from Austin Amelio, a crazy-eyed look from Steven Ogg, an “I’m having a hard time keeping this together” smirk from JDM would send me down the rabbit hole of giggles. I love these dudes.

This is probably the only time I would have been happy to be a Savior because that scene was just brilliant and when you think about all of those characters in one room together that long it had to be a good time.

Watch the whole scene below!

Every Time We’ve Seen a Helicopter on ‘The Walking Dead’