And the Will & Grace guest star roster continues to grow with a visit from Jenny from the Block – two visits actually! Following on the heels of other returning guest stars like Harry Connick Jr., Minnie Driver, Michael Arangano, and Bobby Cannavale, Jennifer Lopez will soon be making her return to the popular sitcom later this season as well. 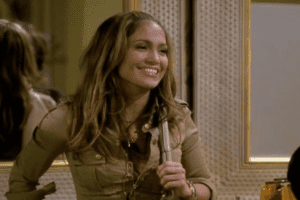 Lopez, who guest-starred on Will & Grace back in seasons six and seven, will be playing two roles on the show – the first as herself and the second as her Shades of Blue character Detective Harlee Santos. While it’s uncertain exactly how co-creators Max Mutchnick and David Kohan will pull off the double duty role, we are sure excited to see it play out because what’s better than JLo? Two JLo’s!

The actress shared a sneak peek of her appearance with the cast earlier today on Instagram.

Lopez first guest-starred on Will & Grace during its original run as the friend of Karen’s (Megan Mullally) now-deceased maid Rosario. She returned later in season seven where she performed “Waiting for Tonight” at Karen and Lyle’s wedding, with Jack (Hayes) serving as her backup dancer.

Will & Grace airs Thursdays at 9 p.m. on NBC, while Shades of Blue returns for season three later this year.Related:

‘Will & Grace’: Harry Connick Jr. to Reprise His Role as Leo and Jack Discovers Online Dating in a New Series Promo

‘Will & Grace’: Stream ALL Episodes for the First Time!

NBC has Already Ordered More Episodes of the ‘Will & Grace’ Revival

Dax Shepard to Guest Star on ‘Will & Grace’

Home » Featured » Jennifer Lopez Is Heading Back to ‘Will and Grace’