I just spent the last few days, submerged in the center of a horrific dystopian future. Usually Hollywood envisions Sci-Fi spaceship/robot filled worlds, desolate wastelands full of steampunk fashionistas driving Mad Max type vehicles or brain eating zombies for our future after the war-to-end-all-wars. When I finished my binge of the entire first season of Hulu’s The Handmaid’s Tale, I had to sit for a while to catch my breath. The idea that as females, we could lose everything women in history have fought so hard for, is beyond my comprehension. Then it slowly sunk in that this story is a mirror of the ugliness in our real-world history, a modern version of all the atrocities that have been done, to women, refugees, African Americans, children, the LGBT community (and so many others) and is still happening around the globe today. Everything in the award winning, best-selling novel by Margaret Atwood, has sadly happened sometime, someplace, to someone already. 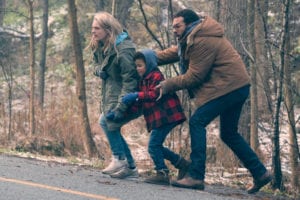 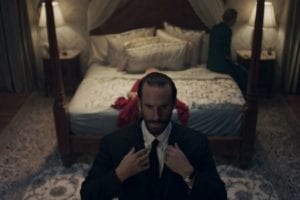 In The Handmaid’s Tale brutal near future, man-made environmental disasters have made most women infertile. Most of the series takes place in this broken world, but we see glimpses through flashbacks of our protagonist as to how we got here. Conflicts around the world became more violent and devastating; governments were overthrown; most crucially, birthrates plummeted. Most women could no longer have children, and even those who could only gave birth successfully one out of five times. Everything becomes a ritual, and no one can be trusted, because the United States has dissolved into a Totalitarian government.

Populations of whole countries are dwindling. The new pseudo-religious regime, formerly the U.S. and now called Gilead, forces women who can give birth to become handmaids, and are property of the state. In a society that’s based on a kind of perverse misreading of the Old Testament, women are forced into following the religious insanity of a sect that has outlawed all other religions. They are then assigned to “commanders,” important leaders in the new world order, who rape them to father children who will be raised by their infertile wives. The handmaids have little or no power, existing in a rare space between property and pedestal. They are needed—there is no future without them—so they are treated better than most women in this vision of the future, but they are also mentally and physically abused, and controlled, in almost unimaginable ways. Lovely, right? 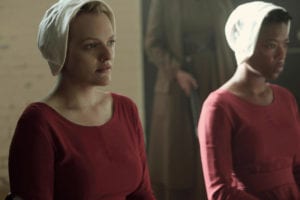 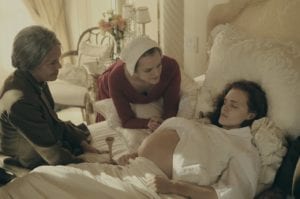 The show features an amazing cast, but the most stellar is our protagonist, Offred, played by Elizabeth Moss. (Just as a note on how much of a possession the girls are – they are renamed after the man they are servicing. Offred, is servant to Fred Waterford, of-fred get it?) We see almost everything through Offred’s eyes, or from her voice-over. We hear her real thoughts, as opposed to what she says out loud. We see her pain, her desperation and most importantly her devotion to not giving up, so that she can be reunited with her daughter. Moss gives one of the best performances I’ve ever seen on television, and if she doesn’t win an Emmy, then someone isn’t paying attention. Joseph Fiennes (American Horror Story) plays Offred’s Commander, Yvonne Strahovski (Dexter) plays his wife and Samira Wiley (Orange is the New Black) is Moira, a close friend of Offred’s in the days before society’s collapse. I was so drawn in by everyone’s performances, that there was no feeling of “acting”, it was pure, true and I couldn’t do anything but binge watch episode after episode until the season finale. 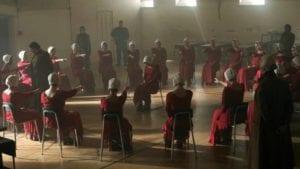 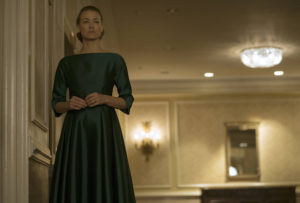 Right or wrong, comparisons are being drawn between The Handmaid’s Tale and the future of America with Donald Trump in the White House. “None of us could ignore what was happening,” said executive producer Bruce Miller. “I mean, I was writing the pilot script during the primaries, during all those debates and all that kind of stuff. So, we were, of course, mindful of that.”

Margaret Atwood’s book has been used in college courses for 30 years and is as timeless as it is timely. So, while we can’t help but feel a definite commentary on present-day America, and be amazed at how “current” the story is, that is completely due to the foresight of the novel’s author.

The Hulu series does an amazing job of bringing the story to the screen. It is filmed beautifully and I loved the way it crossed back and forth from future-present, to past, to explain what had happened to get us to this horrible point. It’s horrifying and shocking, yet still subtle, emotionally rivoting and understated. When they started production a couple of years ago, Hulu never could have guessed how relevant their adaptation would feel when it premiered in April 2017. There’s a scene where a group of protesters are marching for rights that are being increasingly taken away from women. It looks a lot like the women’s rights marches that took place all over the country this year.

As a journalist who usually covers traditional horror genre films, the series for me, is true horror at its most terrifying. When the girls are in training to be “biologically responsible”, they are told by the cruel Aunt Lydia (played by a chilling Ann Dowd) “This may not seem ordinary to you right now, but after a time it will,” I got chills, real chills, and many scenes made me cry or cheer, for the horrible things done, and the brave responses from the handmaids, under the direst of circumstances.

This will not be a recap of the show. I am not going to tell you the synopsis of each episode. All I am going to say is you need to watch The Handmaid’s Tale. It is important, and will wake you up if you have been dozing your way through our current events, or history in general. No going back to sleep now – we all need to be awake, aware and thoughtful of the injustices and gender inequalities that go on around us every day. Human rights are being abused every moment, somewhere. A line in the show explains the new leaders’ justification for the abuse the women are enduring- “We only wanted to make the world better. Better never means better, for everyone.” Ouch. Yes, a man made that statement.