IDW Publishing will be releasing a new five part mini-series this summer starring Godzilla in “Godzilla: Rage Across Time!”

Here are the breakdowns of the first two issues: 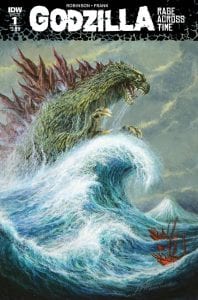 Issue #1 – Written by Jeremy Robinson with art by Matt Frank. Move over dinosaurs… monsters used to rule the planet! Travel to different time periods to examine the origin of myths that fueled nightmares! In this first installment, Godzilla brings his terror to feudal Japan! This issue features a variant covers by Matt Frank and Bob Eggleton. 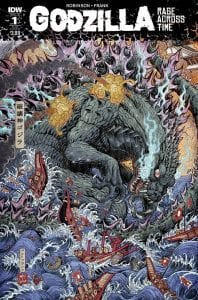 Godzilla: Rage Across Time issue #1 will be released in August of 2016. 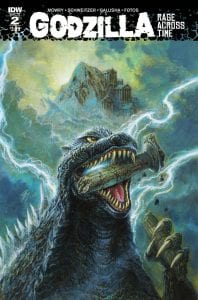 Issue #2 is co-written by Chris Mowry and Kahlil Schweitzer, with art by Tadd Galusha. In ancient Greece, the gods would toy with the lives of mortals as it suited their fancy. None could oppose the will of these mighty gods… until the arrival of Godzilla! This issue features variant covers by Tadd Galusha, Bob Eggleton and Aaron John Gregory. 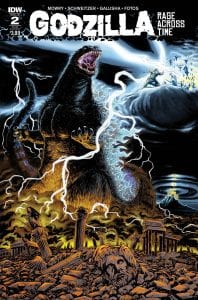 Godzilla: Rage Across Time #2 will be available  in September 2016.

IDW will have the Kaiju King featured in different time periods and face not only the humans, but the monsters and gods of those eras. Each issue will also feature different writers and artists. Is Godzilla the oldest living creature on Earth battling his way through time? Is he somehow traveling through time and has to deal with each new period he lands in? This will be very interesting as to who or what creatures will be featured. Such as a giant Kappa or Tengu from feudal Japan and a Kraken, sea serpent or giant troll from the norse era.

Ancient Greece will have Godzilla take on the mighty Zeus and his family. Will Zeus unleash Hydras, Cyclops, chimeras and minotaur’s to test the King as he lays waste to Mount Olympus?

Godzilla: Rage Across Time #1 will be released in August of 2016.