Last week, the Friday the 13th community experienced a tragic loss. Steve Dash (Steve Daskawisz) passed away at the age of 74 due to complications of diabetes. Steve was known to many as Jason Voorhees from Friday the 13th Part 2. In addition to his titular role in the series, Steve worked as a stunt man on multiple projects including Ghostbusters and Mr. Hush.

Even a week after his death, fans of Friday the 13th still mourn the passing of their Jason. A New York native, Steve knew exactly how to make all of his fans feel like family and he absolutely loved hearing stories from their personal lives. For the past few years, Steve highly enjoyed attending conventions and meeting Friday the 13th fans all across the country. If there was one thing you could guarantee from Steve – it was always a great laugh. 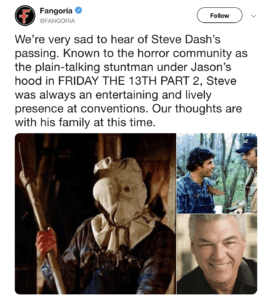 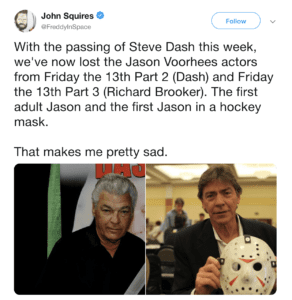 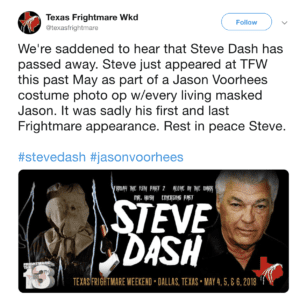 Before his passing, Steve wrapped on his final project: Friday the 13th: Vengeance, which is a Friday the 13th fan film. Steve took on the role of Sheriff Jason Realotti, who is the Sheriff for Wessex County. Sheriff Realotti holds a deep secret about the campgrounds dark past, although what he knows exactly  is his own personal purgatory. Friday the 13th: Vengeance is targeting a release timeframe of May 2019 – and will be released online on both Vimeo and Yourube and on DVD/Blu-Ray for those who backed the Kickstarter Packages.

A few days ago, Friday the 13th: Vengeance Director, Jeremy Brown, announced that the film, Produced by Brownspace Films in association with Real Fiction studios, will be officially dedicated to the memory of Steve Dash.

“Vengeance will be dedicated to the memory of Steve Dash. This film will serve to not only honor what he did for it, but to honor our friend, our family, our Jason. Farewell Steve, we will miss you terribly and you will never be forgotten. We love you.”