Unless you’ve been put under some sort of sleeping spell, you’ve hopefully watched the first season of Netflix’s horror teen drama Chilling Adventures of Sabrina. The series dropped this Halloween and has been a smashing success for the streaming giant, earning it a Christmas special called Chilling Adventures of Sabrina: A Midwinter’s Tale, which is set to drop on December 14th.

The episode will follow Sabrina and her family and friends as they celebrate the Winter Solstice, which is the longest night of the year. It’s also when the veil between this world and the next is at its thinnest, making it the perfect time to conduct a séance — which Sabrina convenes, to try and contact her mother. Netflix revealed that the episode would feature a flashback to Young Sabrina and the actress that they’ve cast honestly looks more like Kiernan Shipka than Kiernan Shipka. The Haunting of Hill House’s McKenna Grace will be stepping into the role and she is absolutely perfect. Just take a look at her in costume! 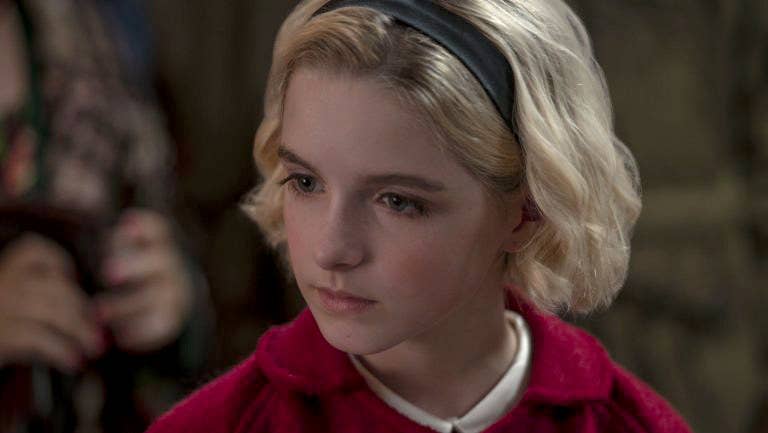 She is basically a miniature Shipka and we have to wonder if there is some sort of witchcraft involved.

I found my mini me!!!@mckennagraceful

The holiday special is being bundled up in Netflix’s upcoming “It’s Beginning to Look a Lot Like Netflix” programming catalog, which also includes The Great British Baking Show: Holidays (Nov. 30), a Christmas special of Nailed It! (Dec. 7), as well as new original movies such as The Princess Switch and The Christmas Prince sequel. You can check out the sizzle reel below, which also includes a few glimpses of Sabrina’s special.

While many Netflix subscribers and horror aficionados will recognize Grace from her role on Netflix’s other recent series The Haunting of Hill House where she played young Theo, Grace’s other credits include I, Tonya, Designated Survivor, Once Upon a Time, Gifted, and Fuller House.

Are you excited to see McKenna Grace play Young Sabrina? Will you be tuning into the Christmas special? Let us know, witches! It drops on Netflix on December 14th.