Harley Quinn is back to delight us with another fun-filled, foul-mouthed episode. It looks like Harley and her new crew have kept busy since last week’s episode, it’s just too bad it doesn’t seem to be getting them anywhere! After, as usual, disregarding everything Ivy says, Harley decides she needs a nemesis. Surely having a nemesis will bring her the attention she craves? She certainly hopes so but reality has a way of disappointing the show’s titular villain. The interactions between Harley and Ivy are great as usual. So much so that last week it made it obvious that Ivy wasn’t around as much. Hopefully, Ivy can stay front and center for the remainder of the season. I also think following through with the Kite-Man and Ivy romance hints would be a mistake.

A Harley-Ivy romance isn’t something that was ever truly promised to us, but I think it’s something everyone is expecting, in time. The real question, assuming they follow through with the Kite-Man hints from last week, is how long it would last? The brilliant people behind this show have to know what pairing Ivy and Kite-Man up would do. I can only assume it would be part of a longer plan, for a bigger payoff later. This is all speculation of course.

This episode also introduces us to this show’s version of King Shark. Subversing expectations yet again, Harley Quinn makes the villain out to be a computer hacker. After unsuccessfully finding a nemesis online (who is making these websites!?) Harley decides she wants Batman anyway!

What is Harley’s genius plan to convince Batman to replace the Joker with her you ask? She steals the Batmobile. I’m not kidding. She uses an app to splice Batman audio clips together and steals the Batmobile. She takes it through Gotham on a joyride, blows a few things up and escapes to a warehouse. Excited to confront the Dark Knight himself leads to disappointment as it’s revealed Robin is the one who came after her. She defeats him easily (he’s 12 after all) and goes home.

Robin, however, had different ideas. He goes on some talk show and claims Harley is his new nemesis, infuriating the clown. What makes it even funnier is this isn’t the comic Damian. It’s like we’re seeing him through the eyes of the characters, as an actual child. Not as the trained assassin he actually is. Everything from how easily he’s defeated to the exaggerated high-pitched voice they use for the character is brilliant. At least they kept the cockiness.

While sifting through the headlines in regards to her and hew new nemesis Harley comes across one from Lois Lane. Yes, that Lois Lane. After a few meta jokes, Harley takes Lois hostage to make her retract the article. Superman arrives and Harley tries to live stream the fight only for Robin to crash in. She and her squad leave without even fighting him.

All this just leads to further humiliation. Harley is turned into a complete joke, with Joker going as far as to send her a congratulations card on her child nemesis. So what’s a villain to do? Well, kill Robin of course. The only reasonable course of action, in Harley’s eyes, is to bash the boy wonder’s brains in. No one doubts her ability to do so, they still all think it’s a bad idea though. So they settle on using King Shark to scare him into admitting Harley never asked her to be his nemesis. She proves to the world on the same talk show Robin was on that he lied.

Instead of that being the end of it though, it’s only the beginning. Robin suffers a nosebleed and King Shark gets a taste sending him into an absolute frenzy. Turns out a previous comment about being ‘not good with blood’ meant ‘turns me into a psycho’. Batman shows up to save the day though, using his trusty shark-repellant. There doesn’t seem to be any corner of the DC universe off-limits to Harley Quinn. 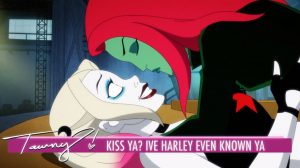 Batman being busy with that prevents him from being around to stop Joker’s heist on a bank. Harley and Batman battle on live tv, which obviously doesn’t go too well for her. Luckily Ivy swoops in to save her at the last moment and turns into a ‘surprise guest’ on the show. The fight resumes except with Ivy backing up Harley, we even get a hint at that romance I mentioned earlier! Joker shows up too and a free-for-all breaks out!  Joker kidnaps Robin to get Batman’s attention back allowing Ivy, Harley and the gang to escape!

Unfortunately, all the commotion leads to Ivy receiving an eviction notice from her landlord, which I can only assume will be a plot point picked up next week. The final scene, however, that’s gotta go down as one of the best in the series. It confirms the existence of grilled cheese sandwiches with Robin’s logo on them, gives us a Batman-Robin talk about Nemesis’ that’s treated like a sex talk and finally has Batman running away when Damian actually asks when he can start having sex.

Those last few moments were completely unexpected, I actually spit out a drink. That’s not a joke, I’m being completely serious. That’s what’s great about this show, it’s completely unexpected. You never know how Harley Quinn is going to portray your favorite character. Not only that, but most of the time it actually leaves us rooting for Harley. That’s the brilliance of this show. I can’t wait to see where the rest of season 1 takes us! Wherever it does though, it seems like Harley Quinn is in good hands.

Want more DC content? Check out the trailer for the last two hours of Crisis on Infinite Earths right over here!