The humans of our Earth fight fire with fire as they begin to create their own counter-measures for Godzilla. Yet, the alternate Earth still has more monster surprises in store!

Godzilla: Oblivion issue 4 continues right after Godzilla destroys King Ghidorah in one of the best choreographed monster battles in issue 3 between the King of Earth and the King of Space! At the climax of issue 3 an army of Kiryu’s (Mechagodzilla) are dispatched to take out Godzilla. 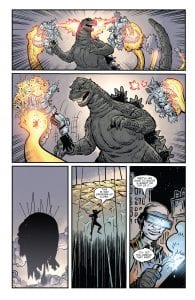 So here we are at the penultimate issue 4! As the battle rages on in Godzilla’s favor the scientists who got us into this crazy mess back in issue 1 decide to remove Ghidorah’s body from the ocean floor and create a Mecha-King Ghidorah.  Godzilla destroys the army of Kiryu, who by the way, are half his size! Godzilla discovers the base where Mecha-King Ghidorah is being built who appropriately comes online at issues end to set-up the final issue of this great series. Oh but wait! The inhabitants of Earth 2 decide to open the time portal  and screw over our earth by sending an army of kaiju to wreak havoc! Godzilla has his hands full once again. 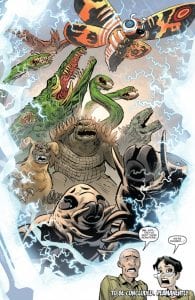 Joshua Fialkov keeps the pacing fast, furious which makes this issue a fun read. His balance of the human and kaiju characters mixes well like your watching a film. Brian Churilla’s artistic depiction of the kaiju, especially the Heisei Godzilla, is another home run.  I give this issue 4 out of 5 stars.

Issue 5 is in 30 days so be sure to pick up the destructive finale! Monsters swarm our world their battles destroy every aspect of human civilization! What escape can be found for a humanity doomed by its own hubris?