The latest episode of Feud sees our stars essentially falling flat on their faces. Now that production on Baby Jane has wrapped, Crawford and Davis are on the hunt for the next great role. The problem? They’re simply too old to snag it.

We start the episode on Davis, who’s been reassigned to a younger, less experienced agent. As she inquires about any film offers, the agent prompts her to consider roles in television. But Davis ain’t having it.

In a bold (and perhaps, petty move) she places an ad in the paper touting her acting skills and experience: 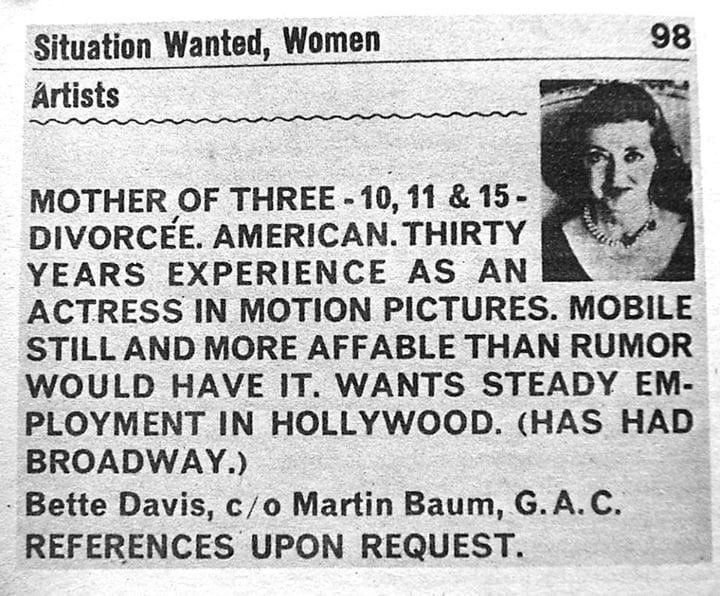 Joan Crawford finds herself in an equally frustrating position. No offers, no prospects of any kind. Instead of going the Davis route and offering herself up for hire, she gives her agency more than an earful and declares that she’s set of finding her next great role herself.

But for both Crawford and Davis, that next success never comes. What they find instead is that they need to be focused on the now. On Baby Jane.

A tentative Crawford attends a test screening of the film – which Bob Aldrich is convinced will be a huge flop – only to be pleasantly surprised that Baby Jane is a hit with the young people in the audience. Crawford basks in the attention she receives at the screening, and Aldrich is chuffed at the film’s reception.

Davis chooses to skip the test screening, but soon embarks on her own little press tour after learning of the film’s success and the widespread praise of her performance. She does talk shows where she sings Whatever Happened to Baby Jane? and calls Crawford an “old broad,” prompting Crawford to drunkenly call and threaten her.

Despite the film’s obvious success, Crawford decides to take a more solemn and laidback approach to the film’s promotion, giving Jack Warner much to gripe about. In turn, a bitter Crawford accuses him for championing Davis (and not her) for a Best Actress Oscar nomination.

All the while, Pauline (Aldrich’s assistant) is set on making a name for herself in the industry with an original script for a film she’d like to direct herself. She presents the film to Mamacita, Crawford’s right hand, who she hopes will give the script and a good word to Miss Crawford.

But Crawford snuffs out any hope Pauline has of having the film made:

Joan’s rejection of the project is tinged with all the misogyny Hollywood has to offer. She suggests that if Pauline goes after more than what she already has with Aldrich,men in the industry will think she’s ungrateful.

Pauline understands this to be true and backs down. But if you’re thinking she shrivels up and retreats after this, you’d be wrong. Leave it to the always resourceful Mamacita to be the hero here. At lunch with Pauline, she explains that women are the majority in America and that Pauline’s time in Hollywood will soon come to pass.

Mamacita also has an instinct to protect and lift up Crawford, too. She lets Crawford sleep right through Oscar nom announcements and gently delivers the news that she has not been nominated for Baby Jane after all.