Share
Pin
Tweet
Recently, Fan Fest spoke with award-winning stuntman, Buddy Sosthand, about his role in the film industry. With titles such as The Amazing Spiderman and Pirates of the Caribbean 2: Dead Man’s Chest under Sosthand’s belt, he’s gained quite a few memories while making these movies.

Fan Fest: How did you begin in stunt work? What is the training process like?

Buddy Sosthand: Before I became a Stunt Production assistant on Fear Factor, I worked on many music videos and commercials as a production assistant. That eventually led me to meeting a 1st AD [Assistant Director] who introduced me to the stunt coordinator of Fear Factor. As a stunt production assistant I was in charge of inventory, cleaning and delivering coffees to the stunt team. Little did I know that I was being trained in the old fashioned way to become a stunt man. The rest is history. The training process usually depends on what discipline you want to focus on. Generally speaking, fights, falls, reactions, are the basics that all stunt performers need to know. I have a background in martial arts (2nd degree black belt in Tukong Moosul), boxing, scuba, and many other athletic disciplines. That being said, each has to be modified according to the needs of a certain project. For the movie Elephant White where I doubled Djimon Honsou, we trained extensive Muy Thai with the stunt team who created the phenomenon Ong Bak.The method of training was intense with naps in between sessions during rehearsal. This was quite different from what I was used to, but I now employ some of those techniques in my training, especially the napping part. [laughs]

FF: What has been the most challenging or exciting film/project you’ve worked on?

BS: I would be lying to say that there is only one project that was challenging. In general, every project has it’s unique challenges. Action usually dictates the challenges, therefore as one older stunt coordinator told me earlier in my career, “There are no easy stunts, kid. They are just different.” This is true, and accurate in all ways. As a matter of fact, when a stunt coordinator tells you that it is a “nothing deal,” be sure to stay aware. Those are the ones that can put you in a hospital. 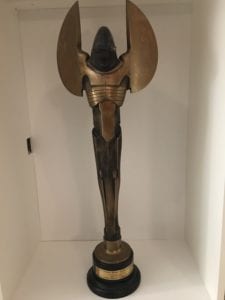 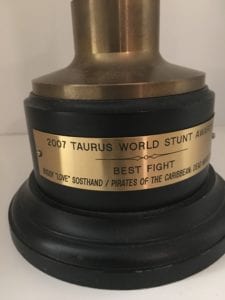 FF: Have you been nominated for or have you won any awards for your stunt-work?

BS: I have won a World Taurus Stunt Award in the Best Fight Category for Pirates Of The Caribbean 2: Dead Man’s Chest. I’ve been nominated for two Sag Stunt Awards in the ensemble category for the movies Get On Up and Captain America Civil War.

FF: What do you have to do to stay in shape for the demands of stunt work?

BS: Staying in shape is based more on lifestyle for me. For instance: boxing, bike riding, martial arts, hiking, swimming, and rock climbing are just a few things that keep me in shape. When a project comes along that requires strict dieting, then I will usually change my lifestyle accordingly.

FF: What is the most dangerous stunt you have ever had to do?

BS: The danger question has been asked many times to stunt performers. Believe it to not, there is not just one stunt that has been the most dangerous because they all have an element of danger. For me to say one was more dangerous than the other, wouldn’t be honest to the craft. Years ago an individual lost his eye doing a fight scene involving a plastic knife. So they’ve all been dangerous to some extent. On 21 JumpStreet, I had to lay a motorcycle down underneath a moving truck. That was intense, but I walked away unscathed. On Pirates Of The Caribbean 2: Dead Man’s Chest, I was just sword fighting and got cut and stabbed multiple times.

FF: What is something most people don’t know about stunt work?

BS:  What most people don’t know about stunt work is that there are a variety of shapes and sizes in the business whom are very athletic. Most people think of the stunt performer as the shredded 6 pack athlete. We have some that are obese, but are just as athletic as most football players. Then we also have people who are small and double kids, with the same skill set.

FF: What projects are you working on now?

BS: I can’t disclose current film projects that I’m working on now because I had to sign non-disclosure agreements. That’s the nature of the business in this day and age. I have a clothing line called American Stuntman76. I’m also hosting a Podcast called The Great American Podcast. I co-host with actor John Pirrucello (from HBO’s Barry) and we talk about everything with a comedic bend. The podcast and clothing both represent a sense of unity in our current discourse. Being that I’m not a policy guy, and my partner in crime is a comedic actor, this gives more flavor to the topics we talk about each week. Our guests usually come on and kick it on the porch with us. That is our basic premise. The idea that it is important to talk to one another as well as engage with respect and dignity. I had a radio show in college, and it’s fun to take a step back to roots while I do stunts.
_______
Learn more about Sosthand here. All photos courtesy of Buddy Sosthand.
Taylor Leddin
Share
Pin
Tweet