Today during the last several minutes of the D23 EXPO Level Up! panel, one of Kingdom Hearts III’s Directors, Tetsuya Nomura, revealed a new trailer and a new world for the highly anticipated game. After the panel was over, fellow Fanfest writer Alyssa Tieman and I got together to briefly discuss our reactions.

Jennifer: So, I guess you liked it?

Alyssa: It looks so good! As in like, graphics, but also ridiculousness.

J: Toy Story was one of the world’s you put on your list, right?

A: Yeah! Totally was. I figured they would probably use it because Woody and Buzz were supposed to be summons in Kingdom Hearts II.

J: Right, that’s what I was thinking, too. They’ve been wanting Toy Story for a while.

A: Also, though not correct in exactly how it’s done, I talked about how ice would be the perfect thing for the flow system that was introduced in KH 3Ds. Instead of it being someone utilizing ice in a summon, Sora can actually use his own magic to propel himself forward.

J: That’s something I’m excited about. They look to be keeping all the best parts of older games and adding on to it. I saw a lot of Birth By Sleep and KH 3Ds in there.

A: I think it’s really cool that Pixar was really involved in the making of KH3 as well. It’s really crazy because I’ve been replaying the games and the jump in the fighting system between KH1 and KH2 is incredible. KH1 is hard because of how archaic the controls are. KH2 had some great improvements. But yes, Birth by Sleep and KH 3Ds introduced a lot of really cool additions that made the game more fun.

The Keyblade transformation stuff is interesting. It’s almost like–wow–too much. But I want to actually play it in order to pass judgment.

J: I think [Keyblade transformations] open up a lot of possibilities for Easter Eggs they can’t fit in anywhere else. It might be an unpopular opinion, but I’m against the idea of Marvel and Star Wars being worlds in the game. But I’d be okay with transformations that reference those properties. Or just Keyblades in general.

A: I actually agree, though in my previous world article I said Star Wars. But only because I want to fly a gummi ship and blow up the Death Star. I think with Big Hero 6 we won’t get Marvel… because it’d be kinda just the same thing.

J: That’s a good point. Although, speaking of gummi ships, it’d be cool to find blueprints that reference Star Wars as well!

A: Oooooh, I hadn’t thought about that. 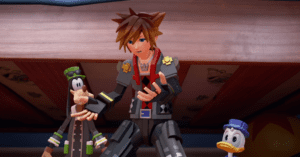 A: They remind me of Legos. Oh! Players are now no longer constricted to just two companions. Donald, Goofy, Woody, and Buzz were all with Sora throughout all that.

J: Yeah! I missed it at first because I was too busy getting pumped up about the mechs.

A: The mechs are ridiculous.

J: In the best way! I wonder if four companions will be the limit.

A: Maybe…. ALl of the interaction was a great addition to KH2. And they’ve definitely ramped it up for this one. It looks like the amount of enemies is greater in each fight, too.

J: I hope that means we’ll be getting a scene similar to the 1000 Heartless fight, but better!

A: So… young Xemnas?

J: He looked so weird! You were saying earlier how the graphics were great, and for the most part, they were. But the part where they weren’t… Young Xemnas. Actually, it’s Young Xehanort, I think.

A: Ohhh! Yeah. I forget about all that convoluted stuff. Plot stuff. So, Nobodies and Heartless mix together to create something else? Is that what he’s saying?

J: I don’t think so. When a Nobody and Heartless are both destroyed they make a person again. That’s why Lea came back, and probably a lot of Organization XIII Somebodies, too. Actually… if we get too much into the plot, my head’s gonna hurt….

J: There are a lot of ‘hims’ to choose from!

A: Too true. Sora’s response is ‘why are you doing this?’ So, I think it’s someone that Sora knows. I don’t know. Too many questions! And yes, too much plot thought gets complicated….

J: Do you think it’s going to actually release in 2018 like it says?

J: If it releases on December 22nd, it’ll be exactly thirteen years since Kingdom Hearts II. I think they’ll aim for that just for the number.

A: Organization XIII! It’s a conspiracy.

The two of us could easily have picked the trailer apart for hours, but we decided to leave it there. Overall, a great introduction to the world of Toy Story and a look at different gameplay elements being added to the franchise. And we now have a handful of confirmed worlds for Kingdom Hearts III:

We hope you guys enjoyed the trailer, too! It just means we’re one step closer to Kingdom Hearts III!