Keeping with my obsession with Christmas movies there are a lot of movies hitting theaters this Christmas season. There is nothing like taking an afternoon away from the hustle and bustle of holiday shopping, wrapping, baking and decorating and just head to your local theater and catch one of the new Christmas movies. Some of these movies will be great family movies, some would be a great date night movies and some will be great girl’s night out so no matter who you take just don’t forget to sneak in your favorite candy and enjoy the show! 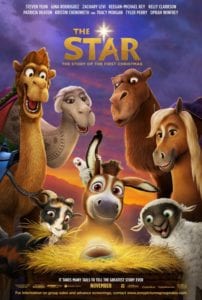 ‘The Star’ is a Sony Pictures Animation film which of course is based on the story of the first Christmas. We follow the story of Bo the Donkey (Steven Yeun) and Dave the Dove (Keegan-Michael Key) and their story as they join the caravan to follow The Star and become heroes and a huge part in the greatest story ever told. ‘The Walking Dead’ fans will be excited to see one of their beloved actors (Yeun) as the lead character in this film. However, there are several awesome actors and actress leading theirs voices in this film including Deborah the Camel (Oprah Winfrey), Cyrus the Camel (Tyler Perry) and Felix the Camel (Tracy Morgan) and many more. This seems to be the perfect family Christmas movie of the season. ‘The Star’ hits theaters November 17, 2017. 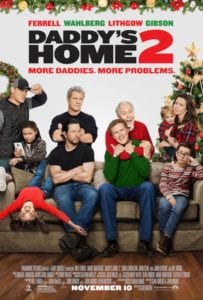 ‘Daddy’s Home 2′ is the sequel to the hilarious ‘Daddy’s Home’ which starred Will Ferrell and Mark Wahlberg. In ‘Daddy’s Home 2′, Brad (Will Ferrell) and Dusty (Mark Wahlberg) find their themselves and their new friendship in the middle of the Christmas season and when their own fathers played by Mel Gibson and John Lithgow arrive for the holiday’s things get out of control. Trying to regain control the situation they decide to take their families to a luxury resort for Christmas but when you put these four men in one location chaos will follow. ‘Daddy’s Home 2′ is now in theaters. 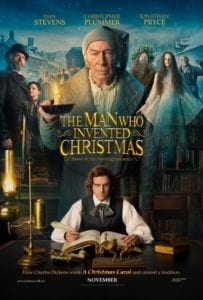 ‘The Man Who Invented Christmas’ is the story of how Charles Dickens so brilliantly mixed real-life inspirations and his imagination to create Ebenezer Scrooge (Christopher Plummer), the Ghosts and Tiny Tim and the story of ‘A Christmas Carol’. If you read my other article you will know how much I love this story, however, this will not be played nationwide so, chances are I will not be able to see it but if you have the chance I urge you to go see it on my behalf. ‘The Man Who Invented Christmas’ hits theaters Wednesday, November 22nd….God Bless Us Every One! 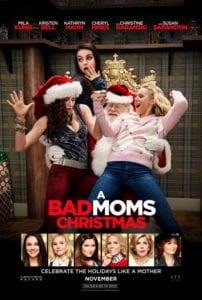 ‘A Bad Moms Christmas’ is the sequel to ‘Bad Moms’. We get to join Amy (Mila Kunis) and her new best friends Carla (Kathryn Hahn) and Kiki (Kristen Bell) as they enjoy their meltdown from all things Christmas. If your Christmas season is not already stressful enough just add your mother to the mix and you will find yourself hiding behind the tree with a wine bottle only because who has time for a glass. This is a perfect girl’s night out movie, so call up your BFF’s bring your “Big Purses” to hold those wine bottles and enjoy ‘A Bad Moms Christmas’ it is already in theaters.

Christmas Movies You Should Watch Just NOT With Your Kids