I’ve been a film fanatic as long as I can remember. Films have molded my personality, created sparks in my imagination and have given me a career path to follow. ‘Review’ can be a dirty word nowadays, as a lot of our personal opinions don’t necessarily align with those of most critics. But, that’s why I love films. They divide us by also bringing us together in the most magical of ways. So, instead of giving you a review, I’m going to give you an analysis of what aspects are strong in the specific film, and what are weak. This is my Atypical Analysis.

In “Brigsby Bear”, Brigsby Bear Adventures is a children’s TV show produced for an audience of one: James (Kyle Mooney). When the show abruptly ends, James’ life changes forever. He sets out to finish the story himself and must learn to cope with the realities of a new world that he knows nothing about. The film is directed by SNL Alum, Dave McCary and stars Kyle Mooney, Greg Kinnear, Mark Hamill and Jane Adams.

Expectations: I went into this film with fresh eyes. Due to a lot of reviews from festivals, word got out that the less you knew about this film the more magical it was. I avoided trailers, but, still had very high expectations. I’m a huge fan of Kyle Mooney and I love The Lonely Island (who produced the film). But, going into a film with very little information leaves your expectations almost nonexistent. For the sake of this review, I will keep it as vague as possible, as I don’t want to spoil the magic of this film for everyone.

Writing: Written by Kyle Mooney and Kevin Costello, the script is what makes this film work as well as it does. While there are a few cliches, the script feels fresh, funny and extremely realistic. The structure of the film plays out beautifully as we follow the journey of James Pope (Kyle Mooney) from the first frame to the last frame. This will definitely go down as one of my favorite screenplays of 2017, and I can’t wait to see what Kyle Mooney and Kevin Costello whip up next.

Acting: A great script needs great actors, and this movie had a phenomenal ensemble. Leading the cast is writer Kyle Mooney, who gives on hell of a performance as James Pope. Honestly, Kyle Mooney is who truly sells this film. His delivery is pitch perfect, and the range he gives throughout the film is one that we don’t normally get from comedic actors. Writing this film is one thing; but, giving an amazing performance on top of that is another. I for one hope to see Kyle Mooney snag a nomination for Best Lead at the GG’s or Oscars. Yes, he’s that good. As for the rest of the cast, Mark Hamill and Jane Adams are absolutely incredible, and Greg Kinnear is fantastic as always. This is a tough category, because, across the board the cast is great.

Sound/Score: This isn’t an action movie by any means, so, I won’t go on and on talking about sound design. But, I will take a quick second to rave about the beautiful score by David Wingo (Midnight Special, Take Shelter, Maggie). The score is colorful, emotional and moves each scene with such ease. While most movie-goers might find themselves ignoring the score when they watch comedic films of any kind, ‘Brigsby Bear’ is not one that should be ignored. David Wingo did an exuberant job creating a score that is memorable, moving and against the ‘norm.’

Visuals: A lot of audience members might find this film strange or unique due to its visual style; but, that’s what makes it so special. From the way that Brigsby Bear Adventures looks on James Pope’s VHS tape to the way the film is shot; cinematographer Christian Sprenger (Atlanta, GLOW) really breathes life into this film. Every single shot is vibrant and absolutely stunning. A lot of visuals stick with you even after the credits roll. With all of that being said, we can’t forget about Brigsby. The look of Brigsby Bear is what works so well, and at first glance Brigsby fills us all with 80’s/90’s nostalgia. The acting, writing and score help make this film work; but, if the look of Brigsby didn’t work, this film wouldn’t work. I truly believe that the character of Brigsby Bear will live on and remain a memorable one.

Directing: It’s important to know that ‘Brigsby Bear’ is director Dave McCary’s debut feature film. When you see this film, you would’ve had no idea that it was. Dave directs the film with such a confidence in the story and knows exactly how he wants to let it unfold over the course of and hour and forty minutes. On the surface, this is a film about the power of storytelling; and, in order to hit that home, you have to be a powerful storyteller. Sure, ‘Brigsby Bear’ is a bit strange and abnormal; but, that’s the point. And, Dave McCary makes an effort to never make the film feel as strange as it should. This is a film that is for everyone with an imagination, and those who just aren’t ready to grow up. Along with the writers of this film, I cannot wait to see what Dave McCary has up next. Everyone needs to keep on eye on this guy; because, big things are coming.

Wrap Up: If you haven’t put the pieces together by now, I’ll just say that ‘Brigsby Bear’ is easily one of my favorite films of 2017. It’s a film that will make you laugh, cry and even scratch your head at times (in the best way). This is a film about the power of storytelling through nostalgia, growing up and being misunderstood. While some might be turned off by the initial bizarre nature of the concept, I assure you that you will be rewarded if you stick around until the end. We need more films like this that feel organic and heartfelt. The entire creative team is one that everyone needs to pay attention to, because, they’ll all be pumping out incredible content over the years to come. Also, if this is the first film The Lonely Island has produced, what else will they have in store for us? Don’t wait. Go see this film. In the words of James Pope, ’Brigsby Bear’ is “dope as shit.”

Here’s a photo of me with Brigsby at SDCC: 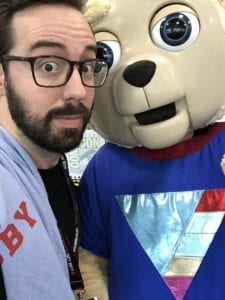