Throughout the two and a half season run of Better Call Saul we’ve watched as Jimmy has progressed from down on his luck aspiring attorney all the way to getting picked up by a big firm only to start his own firm with his sort of girlfriend/best friend Kim. During these runs there was an underlining emotion that drove Jimmy McGill, no matter how bad the odds seemed stacked against him, optimism. Jimmy was always optimistic that the next adventure would be better. That the next adventure would open the window to success, and so he chased and chased and chased the brighter future. That’s what helped make Jimmy so loveable to the audience. Yes, he was doing things a bit underhandedly but he was charming and it all seemed to be coming from a good place. If such a thing is possible when you’re playing people, but it is then Jimmy McGill was nailing it. Last night we got two different sides of Jimmy, something we haven’t really seen a whole lot of during Saul’s run… defeat and maliciousness. Let me tell you Geeklings, neither one of those were good looks on our boy Jimmy. 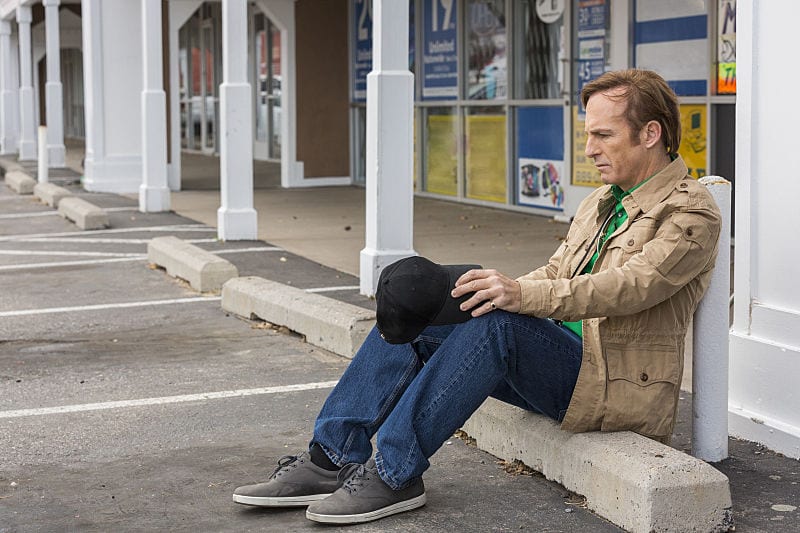 The war with Chuck seemed to have clear cut winners and losers.  Based on how that court room drama played out it seemed that Jimmy and Kim were the clear cut winners, Jimmy was able to continue to be a lawyer and only received a twelve month suspension, while Kim got to prove to her former bosses that she was worth it. Meanwhile Chuck looked like a crazy old loon who wears space blankets because he enjoys them not because he actually needs them. But my friends there was more to this battle than we were willing to see, and it appears that now maybe it’s Chuck who was slightly victorious. Sounds strange doesn’t it? Look at the facts though. Chuck had his moment in the court room and had to eat a whole bunch of humble pie and suffer a great deal of embarrassment, but what happened next? Howard came over with some crazy expensive scotch or whiskey or whatever super rich lawyer types drink and he started to understand that his sickness… it’s all in his head. That gives him the ability to course correct which is why we see him wandering the streets of New Mexico wrapped tightly in a space blanket using pay phones. I don’t know what’s more strange here, Chuck roaming the streets in his tin foil blanket or the fact that he found a pay phone.

There’s this hope that Chuck can move on and the irony of it is his brother, who he detests, will be responsible for his healing. That’s a pretty big win. What does Jimmy get out of this besides not losing his licence and confirming his brother hates him? Nothing. He gets nothing. Literally. When we first met Jimmy he was living in the back of nail saloon with an office/bedroom that even Harry Potter would have thought small, and he never seemed as defeated as he does now. The money is gone, the commercial idea is floundering, the car is dead, he’s tipping delivery boys a dollar, and turning down money from college students. There’s this sense of pride to not want to close the firm, or move it to another building until his suspension is up, but there’s no way for Jimmy to keep this up. Which brought about a new shade in his character, one that was rather scary. Anger. Jimmy is angry. There’s this feeling the world owes him, he defeated his brother but he still has to pick up the pieces of his life while Chuck drinks fancy scotch. That’s b.s.! 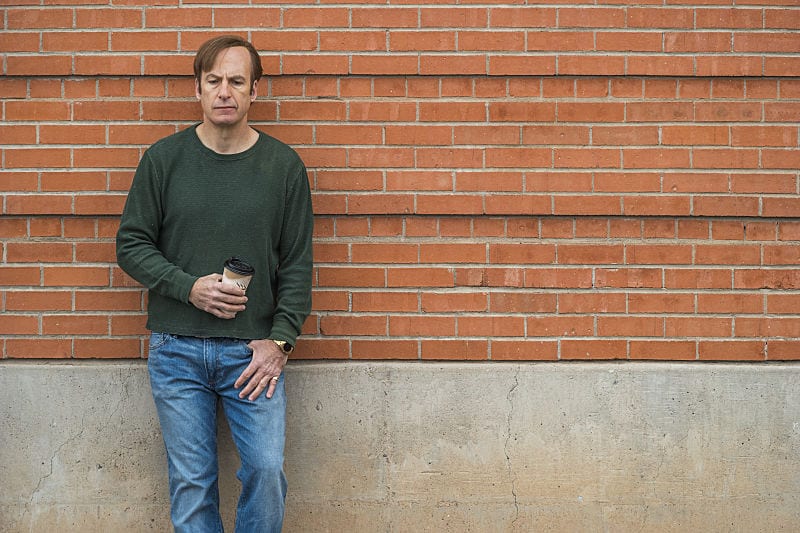 Seeing Jimmy “break down” in the insurance office was some of Bob Odenkirk’s best work on this show because for a minute, just a minute, I believed that Jimmy had finally broken. Who could have blamed him? Although while I watched it something seemed off, Odenkirk has really grown into a tremendous actor who deserves all his Emmy nominations, and this crying seemed a little weak. Almost as if it was disingenuous. Once Jimmy understood that he would not be getting his money back, and his premiums were going to get all crazy town banana pants, the only thing he had left was a massive eff you to Chuck. What we saw was a well orchestrated attack from a con man who has had enough. Jimmy wasn’t leaving that office without a win, and putting his brother and his mental condition on the radar of the insurance company was just the ticket. Scratched that itch. That’s why you get that malevolent smile to close out the show. I used to think Saul Goodman would born out of family strife and the need to be something else, and while it well remain that to a degree, what if it’s stemming off the fact that Jimmy McGill has zero effs left to give.

That’s what makes his grifting game in the restaurant so tense. Jimmy is actually plotting taking these people down because he finds them to be elitist. The type who think they’re better than everybody else, and that’s how he views Chuck, and Kim sort of sees through it for a minute. Suddenly the game seems super real and Kim has a tough time drawing the line because she’s got her own demons to battle. On the one hand she is crazy over worked and burnt out. Mesa Verde is a massive client that could probably use a team of lawyers, but Kim is diligent, hardworking, and on her own. On the other hand she is riddled with guilt over what happened to Chuck and understands that she is some what responsible. Indirectly of course, but it it wasn’t for her existence Jimmy wouldn’t have pulled the scam in the first place. Kim is quickly traveling the road of self destruction, probably shouldn’t snap at your boss like that, and it just goes with my original theory that she will be the shows biggest casualty. 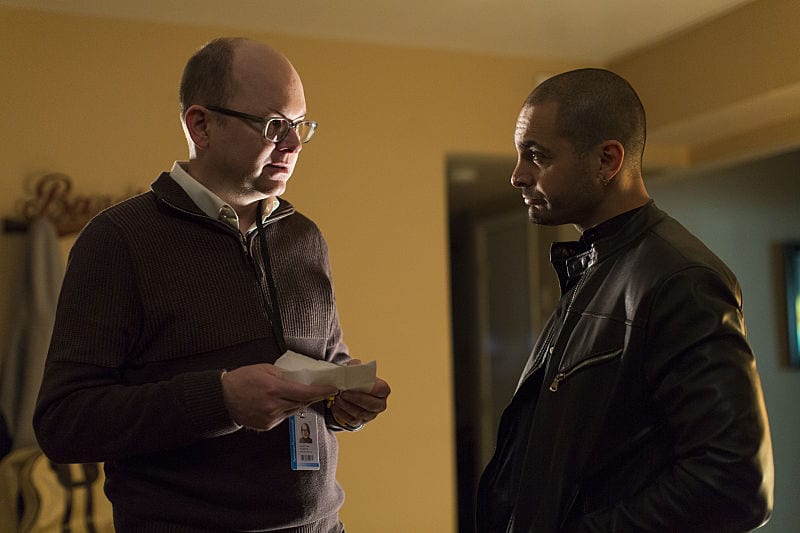 Did you get all of that? Because we haven’t even touched on Mike, with a possible love interest (say whaaaaaaaat?!), and his involvement in Nacho’s plan to kill Hector. The long and the short of it is Nacho reaches out to everyone’s favorite baseball card collector, Pryce (that name though), to help him get empty pill shells to fill with death. It’s not the worse plan I’ve ever heard, but Mike eventually tells him how to do it better after being pulled reluctantly back into this whole mess. I think Nacho’s need to protect his father prays on Mike’s need to atone for betraying his son which is why he tries to talk him out of the killing of Hector. Clearly, Mike believes too man things could go wrong but once he notices that Nacho won’t budge he gives the only advice he can… switch the pills back to the regular meds once the deed is done. Sound advice, the only thing is we know from Breaking Bad that this is probably not going to go well. At all.

There you have it Geeklings. What did you think of this week’s episode of Better Call Saul? Is Jimmy heading down a path that he can’t come back from? Is Kim self destructing before our eyes? Will Nacho get himself killed or does Mike have something up his sleeve? Sound off in the comments below. As always if you want to talk all things Saul or Breaking Bad you can find me on Twitter @iamgeek32. I believe the show is taking a couple of weeks off, blegh, so the reviews might have to also. Maybe in the time off I’ll drop my Jesse Pinkman theory on you guys. In the mean time be sure to check out my other stuff here at Fan Fest, like my Pull List column. Until next time…