One of the things I loved the most about Breaking Bad was when it returned from season breaks or extended time off it never felt like it was gone for such a long period of time. During that off time I sat and craved new episodes but once it returned I was left feeling like it had never left in the first place. As soon as the screen transitioned into the content of the show it felt like putting on a worn in hoodie. There was no gap in story telling. There is never any “three years later” or an extended period of time where we have to either fill in the gaps or wonder what was happening to our characters. The story was always the first thing that got served, and that is no different with Better Call Saul. Season three literally picks up right where season two ends because those events are too important to walk away from. We can’t come into this episode with a few days passing because in this world a few days can sometimes be the equivalent of a few years. So much happens, and the show creators recognize this and emphasize the importance of the story being told. That alone helps catapult Saul into one of televisions best shows, and then you add in the fact that the episode was fantastic and you start to put it on another level.

The more I watch Better Call Saul the more I start to understand that this is a tragic story. We’ve been conditioned in anticipation for the arrival of Saul Goodman, because it’s the title of the show and we love the character from Breaking Bad. We want to see that guy who hands out Hello Kitty phones and gets massages in his office while potential clients slowly go insane in the waiting room because he’s vibrant, off the cuff, and crafty as hell.  There’s an enjoyment factor with Saul Goodman and his antics. Beyond that though there’s a real heaviness tied to that character, and make no mistake about it Saul is a character, and that’s a story of heartbreak and loss. The loss of identity and the loss of family. The writing is on the walls when it comes to Saul Goodman, he cannot exist if Jimmy McGill does. I don’t think Saul goes home and takes off that particular mask and exists as Jimmy behind closed doors. I think his life is 24/7 Saul Goodman, a louder than life character that exists as the antithesis of what his life was before that. 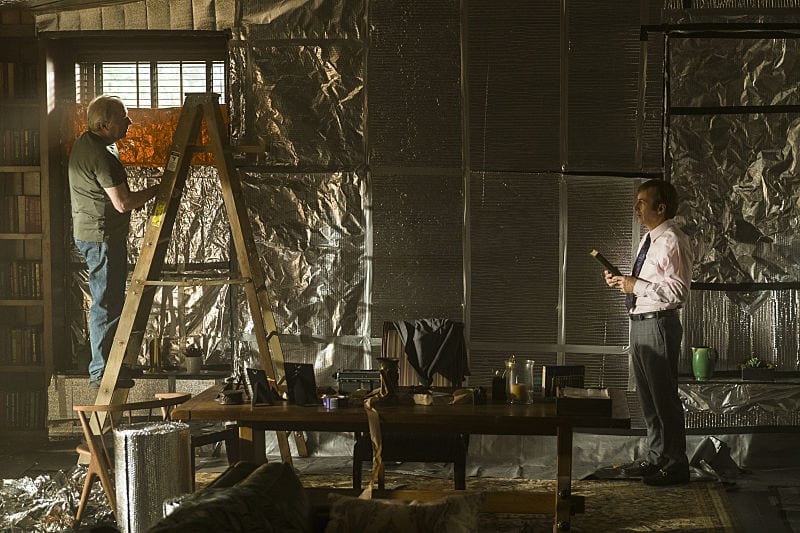 The premier of season three started to really explore the idea of what it means to become Saul Goodman and what gets left in his wake. This all ties back into the tragic nature of this story. Jimmy McGill is a man that wants one thing and that’s the acceptance of his brother. Don’t get me wrong because Jimmy has a particular way of presenting himself with his under handed deals and shady dealings, but I believe that it’s his way of trying to reach out to Chuck. Why do most people act out? Because they want attention. Look at Jimmy’s life, he more or less has gone out of his way to emulate Chuck as often as possible. Not only does he want the respect of his brother but also to be looked on as a peer, and Chuck can’t see beyond the Jimmy who stole from their father and was the last name their dying mother asked for. The stealing from the father, of course is particularly awful, but I want to believe that Jimmy doesn’t commit these acts to be malicious. He needs structure and an anchor, and acting out is the only way he knows how to ask for them. There’s the hope that his older brother will swoop in and treat him like a brother instead of a liability and that adoration and hope is never returned. Think to that the job in the mail room in the firm which is clearly done to keep an eye out for Jimmy’s instead of supporting him. Their relationship is made of a million little things like that and is punctuated by the magnificence chemistry between Bob Odenkirk and Michael McKean. These two just chew up their scenery.

Which puts us in a very interesting predicament. As an audience we’re rooting for Jimmy which kind of puts Chuck in the villain role. Think about for a moment. Here is a character who represents doing things by the book and the law, yet we find ourselves getting angry with him for the way he treats Jimmy. That whole conversation about the night light and the book was significant because, like Jimmy said, Chuck acted like he didn’t hate him for ten minutes. But that’s all it was, an act. Chuck immediately pulls himself away from having an emotional tie from Jimmy and threatens him for his actions. Yes, Jimmy clearly did something wrong. There’s no getting around that, but his actions, as shady as they are, stem from a good place. He recognizes that Kim works her ass off and deserves to be rewarded and that the world won’t go out of it’s way to reward her. Much like Saul Goodman, Jimmy steps up for the little guy and makes sure that Kim gets hers. What will the repercussions of this be though? That is yet to be seen as it’s clear that the way she obtained Mesa Verde is heavily weighing on Kim which should be something we pay a lot of attention to as the story progresses. I smell a nervous break down.

Chuck is currently in the process of killing off Jimmy McGill, and his crafty plot of having Ernesto “accidentally” hearing that tape is the first real step in serving their relationship for good. Jimmy already has a great deal of misdirected anger, see his rant against that solider that was clearly meant for Chuck, and has reached a threshold of how much he can swallow, which works into what’s happening to Gene in Omaha. These season premier cold opens are some of my favorite aspects of the show, and this season we see Gene kind of rage against the machine. Something we know that has been brewing for awhile in his little acts of defiance (“SG Was Here”) and the watching of old commercials. Gene turning the shoplifter in was done out of fear of authority more than anything, thanks Heisenberg, but screaming for him to get a lawyer was his way of trying to maintain his identity. At this point in the story Saul Goodman is dead, much like Jimmy, and it’s symbolized by the stripped away colors and the neutered nature of Gene. Gene from Omaha needs to stay off the radar yet Saul won’t let him. He’s like that devil on your shoulder and the adrenaline of that action is what causes him to pass out mid-frosting. Man, I want more of this story. 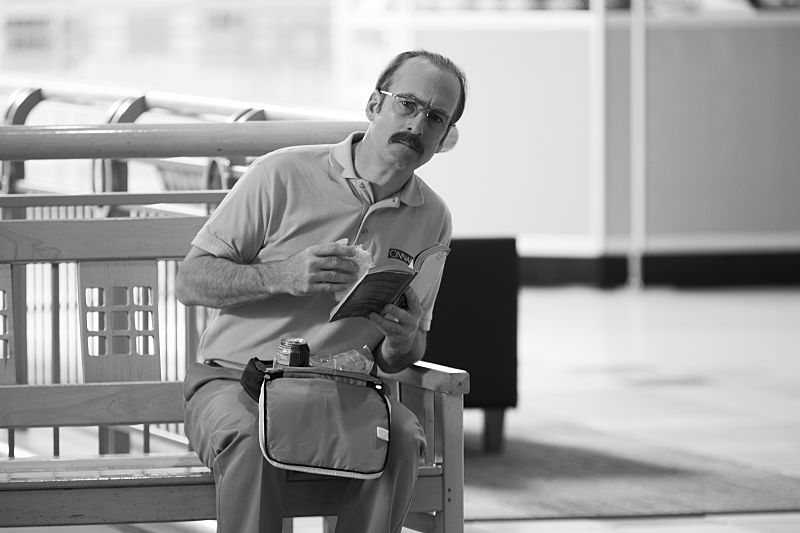 I know I’ve talked your eyes out but I’ve got a few more things to say about this episode before I let you go. 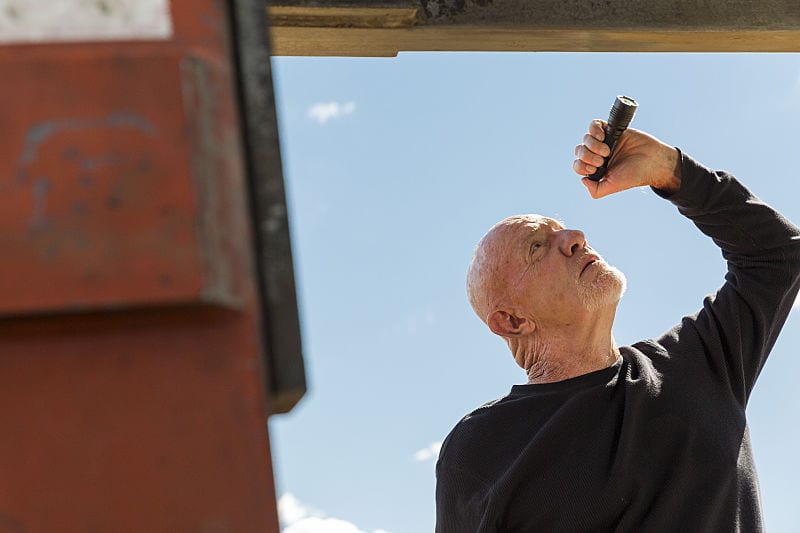 There you have it Geeklings. We took a really deep dive into the season opener and I have to say my excitement levels are all types of high for what’s to come next. What did you guys think? What is Chuck’s endgame with the tape? Will we see more of Gene this season? What’s the future hold for Jimmy? Sound off in the comments below. If you guys want to talk all things Saul or Breaking Bad related you can find me on Twitter @iamgeek32. Until next week, many huzzahs!