It was around the fifteen minute mark of last nights episode of Better Call Saul, “The Witness”, that I discovered that we were watching something special. The gravity and weight of the story hung on every corner of the episode like Mike on his would be followers. Everything that was being presented on screen felt important and essential in a bigger sense than just this episode. Breaking Bad hung in the air, and not in away that deterred from Saul but in a way that ignited it. Suddenly Saul became something much more. It was then around the sixteen minute mark that I got excited knowing that I was going to be coming here to discuss it with you.

Much like it’s predecessor, Better Call Saul is literary story telling at it’s finest. We live in an era of television that is more than just escapism, it’s art. This was something that was brought to the mainstream by shows like Breaking Bad and Saul takes this formula and this method and beautifully executes it. Not in just the sense where the show asks a lot from it’s viewers but also asks a lot from it’s actors. There were at least four pivotal scenes last night that used little to no dialogue and scenes like that a director (in this case it was Vince Gilligan himself) relies on the abilities of his actors to tell a story with their actions and expressions, and boy did they rise to the challenge. Odenkirk, Banks, and McKean delivered masterful performances that heightened tension, further developed their characters, and advanced a story by chewing up their scenery while relying on the audience to trust them. To trust that dialogue wasn’t needed. That these actors are so deeply embedded in the skin of their characters that we never doubt the validity of their actions. “The Witness” is a tremendous display of excellent television across the board. Whether it’s directing, cinematography, or acting. In a lot of ways it reminded me of the movie Drive in that less was more. And fun fact, Drive had Bryan Cranston in a supporting role. 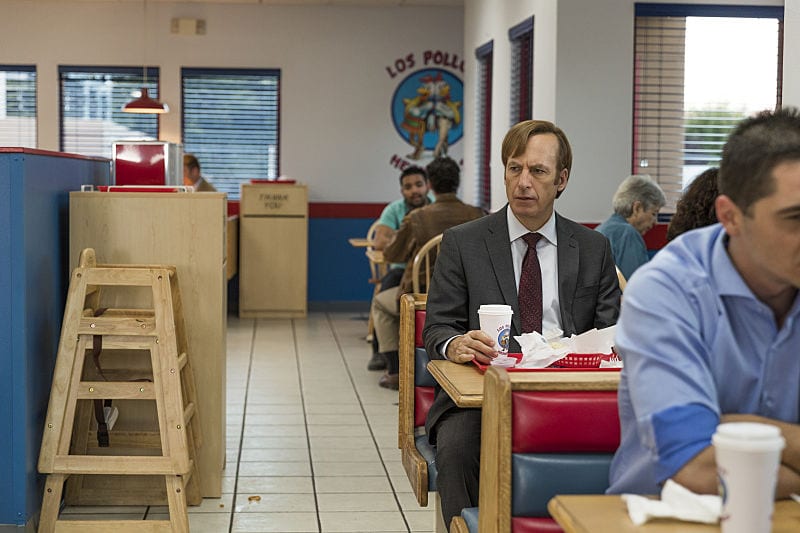 The purpose of “The Witness” was to humble our two main characters. Both Jimmy and Mike are usually ahead of the game, or at the very least, in control. This can be seen more so with Mike who always has the one up on anyone he deals with because of his diligence and work ethic, but Jimmy has the ability to work his way out of situations with his gift to gab. Jimmy seems like he knows what he’s talking about where Mike actually knows. Irregardless both characters are used to having things kind of fall their way, and last night they both got played. And played hard. It makes sense that their two story lines would intersect as they both had the same literary outcomes.

This episodes outcome is a result of both Jimmy and Mike underestimating their opponents. With Jimmy he relies on the fact that there’s no way family would cross that coveted line. You can be angry and disappointed, but at the end of the day you’re blood. That’s why Jimmy doesn’t put a lot of fear into his confession to Chuck. Part of it is still holding on to the hope that Chuck will protect and mentor him. The other part is that unspoken code. Family looks out for family despite how much you may want to strike them. All of this stems off of Jimmy’s thin belief that somewhere behind that gruff exterior, Chuck actually cares for him. Hell, Jimmy needs that belief because it’s the only thing keeping him anchored to the light side of the line. If he loses Chuck what will happen? We know that answer is Saul Goodman, but Jimmy doesn’t yet and that’s what makes his discovery of the tape so tragic and heartbreaking. To Jimmy they’re brothers, but to Chuck he’s a blemish. Not only on the family but on Chuck’s legacy.

If you noticed before Jimmy lost his cool he was subconsciously rolling the tape off the walls just like Chuck had taught him. That’s the type of impact that Chuck has. There is little doubt that Jimmy emulates his brother because he’s fighting for that positive attention. His meltdown at the end of the episode is years and years of neglect coming to a head. Chuck’s creation of the tape is the affirmation that Jimmy has been avoiding his whole life. Chuck doesn’t care for him, and that throws his world off it’s axis. He kicks in the door, breaks open the draw, and shreds the tape while Chuck looks on both stunned and pleased. A part of me wants to believe that Chuck thinks he’s gone too far but when he refers to Howard and his private security the last domino has fallen. This relationship is severed and Jimmy realizes his crime of passion could be one of damnation. 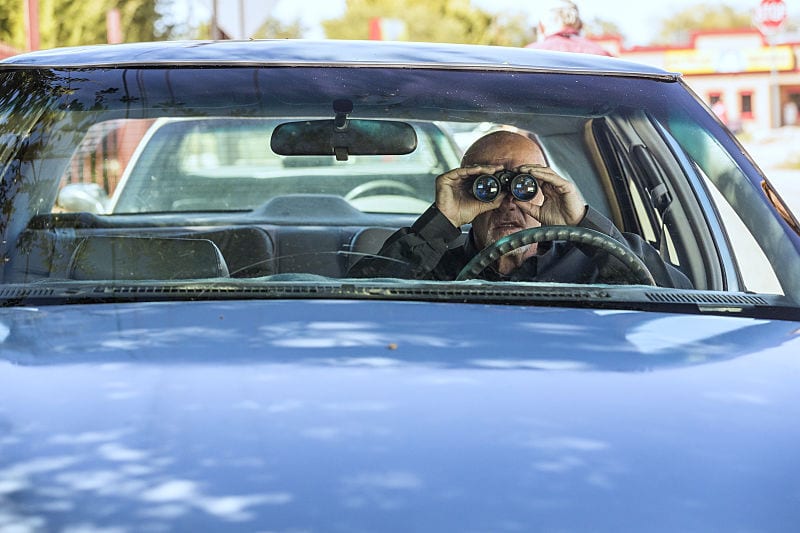 On the other side you have Mike who acts not only coolly but precisely. He does everything by the book. Mike is meticulous with the way he invests his time, he follows at the right distances, uses his binoculars on this rearview mirror in order to creep on Los Pollos, hires Jimmy to go into the restaurant to find out info on the tracker exchange (how incredible was that scene), and follows his instinct when Victor (that’s right, he’s back too) speeds out of the parking lot, and still finds himself on the losing end. That scene on the highway is one of my favorites of the show. I swore aloud when Mike and I discovered the phone and the gas cap at the same time. On the one hand it’s watching Mike be defeated cleanly, unlike his outcome with Walter, and it’s tough to watch. Mike has always been one of my favorite characters in this universe and watching him get one upped held impact. Banks sells the frustration at his slice of humble pie beautifully. The kicking of the gas cap and the utter disdain in his voice as he answers the phone spoke volumes to what he was feeling, again so much with so little, yet I couldn’t help but get a little bit excited. That phone call should be the catalyst to something larger. A relationship that will define the later years of Mike’s life.

Which brings us to Gus Fring. Yes, he returned (or arrived depending on your view) last night and it was intensely awesome. As I said before, I loved the scene of Jimmy in Los Pollos as Gus lurked, out of focus, in the background. His presence reminded me a lot of the shark in Jaws as he was hunting but Jimmy has no idea of the imposing nature of the figure he’s about to interact with. There is so much power and authority on the horizon and Jimmy is so focused in on that backpack that only we the audience pick up on it. Mostly because we’ve seen Breaking Bad and we know what lurks quietly in the night, but those background shots help to emphasis just how in control of the situation Gus is. You have to figure he’s already tipped his guy not to make the exchange and now he wants to know how things are going to play out. The interaction with Jimmy boiled with unknown tension and inquisitive investigation on Gus’s part. Who is this guy? How much does he know? Could Mike really be this foolish playing his hand like this? That’s what makes Gus’s final scene so freakin’ awesomely Gus. Just the sound of Jimmy’s car is enough for him to put everything together and further display just how in control he is. All. The. Time. Giancarlo Esposito hasn’t missed a beat with this character. 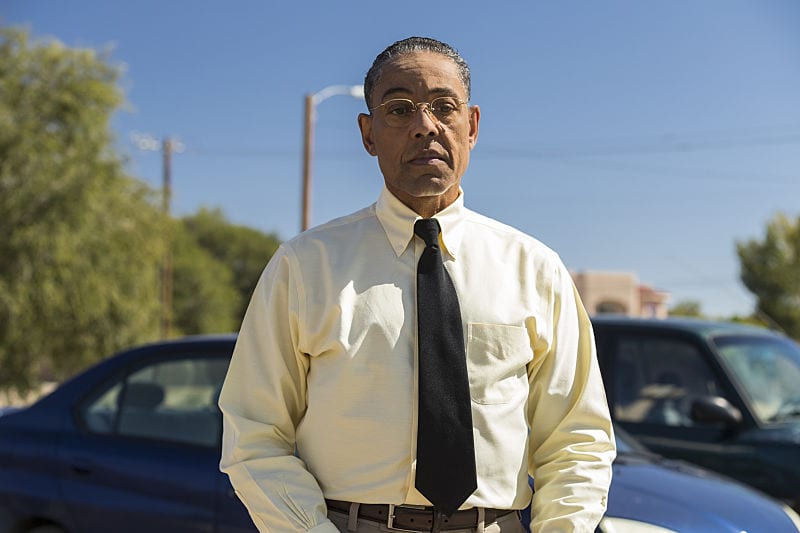 I have some other quick thoughts before I leave you-

There you have it Geeklings. Better Call Saul is only two episodes in and it’s already firing on all cylinders. With the cat being out of the bag on Chuck’s tape, I wonder where we go from here. There’s no slow burn in this universe. What did you guys think? Where you happy to see Gus return? What do you think will happen to Jimmy? Can Mike find a way to get the upper hand back? Sound off in the comments below. If you’d like to talk more Saul or Breaking Bad you can find me on Twitter @iamgeek32. In the mean time see you guys next week!