Writing television reviews has become sort of a sanctuary for me. I watch these programs and spend the following day trying to formulate my thoughts so I can come here and discuss what we just watched together. There are days where my thoughts pour from my head to the screen as I have a million things I’d like to say, and there are days where I have so many thoughts that I’m not sure how to formulate them. That happened to me with my latest Orphan Black review, as I had articulated that column differently in my head but somehow lost some of those thoughts as I tried to put it on the screen. It was a bummer but it happens. Sometimes the events of a show are a difficult to grasp. I thought that was happening here with this review. I sat in my chair last night and watched as Better Call Saul wowed me scene after scene. When it ended I immediately tried to find my avenue into this review, and I thought I had it too, until I started writing. That’s when it dawned upon me… sometimes the inability to formulate thoughts is actually the review. 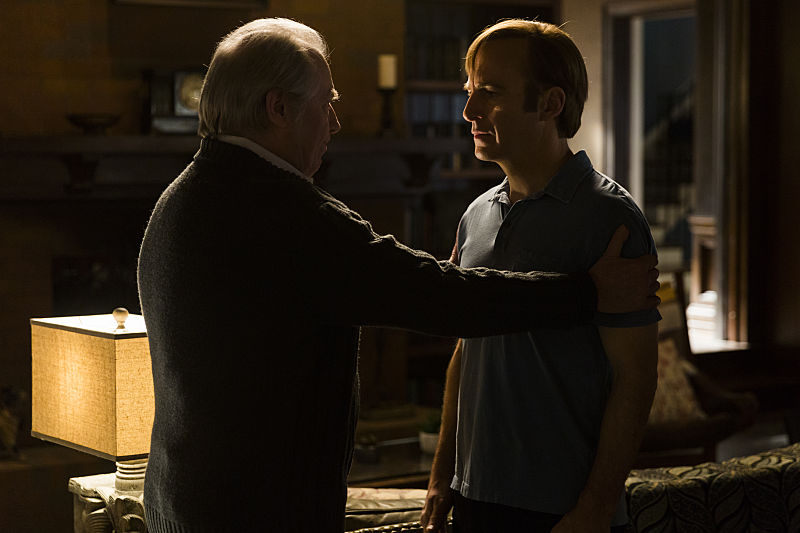 Season three of Better Call Saul has been about the consequences of action. All season long we’ve seen our characters commit actions and reap what they’ve sowed. With Jimmy and the forging of documents he finally found out just what his brother Chuck thought of him, an answer he’s always needed, but once obtained sent Jimmy spiraling out of control. Suddenly he had no law practice, suspended for a year, no brother, and a loss of identity. Out of that loss came Saul Goodman, a commercial character, used to sell air time to businesses that didn’t necisarrily need them. Saul became Jimmy without a conscience which manifested into something scary. I’ve sat here waiting for this transformation for three seasons and once it arrived I didn’t want anything to do with it. Jimmy McGill had become such a loveable underdog who committed less than savory acts that were never really malicious. Saul Goodman didn’t care about that. Saul Goodman cared about Saul Goodman and getting ahead. This was apparent with the manipulating of the old folks home against that poor old lady which was Jimmy’s most deplorable act. I said here a week ago that that was that act that killed Jimmy McGill, and I was only half right.

Last night saw Jimmy atone for the sins of Saul, and in a lot of ways he got what he deserved, but he also showed us that Saul hasn’t completely taken over. There is still some of that Jimmy heart left beating and that was comforting to see even if it’s just prolonging the inevitable. Much like winter, Saul Goodman is coming, but I’m more than okay with keeping him at bay for now. Jimmy setting up that chair yoga scenario so he can get “caught” confessing to manipulating the elderly was what he deserved and Jimmy understood that. He took his most heinous act and owned up to it while taking the consequences on the chin.  This was a really satisfying moment seeing Jimmy acknowledge that he’d gone too far. Chuck tells him point blank that Jimmy will always be sorry for his actions because Jimmy never believes his actions are meant to be hurtful, and maybe this is true. Maybe in order for Saul to come all the way to the front Jimmy needs to lose his conscience, but as of right now there is still a thread there.

I’ve really enjoyed how this season has transformed our characters as just about everyone has done some sort of 180. Nacho became a character who was kind of the paper mobster muscle to someone with extreme depth and soul. Chuck went from this heartless older brother to complete underdog back to heartless monster back to sympathy case, and a lot of that transformation happened within this episode. Jimmy’s guilt brought him back to his brother’s house for the first time since the trial and what transpired was not only one of the best scenes in the shows short history (please nominate Michael McKean for an Emmy), but it’s most heartbreaking. Jimmy gives what seems like a sincere apology because he does miss his brother. The whole court room episode was done in the hopes that Chuck would see his treatment of Jimmy and change. That’s all Jimmy has ever wanted, an older brother who cares for him. His apology is the continued search for that and Chuck brings it all crashing down. Hard.

Chuck who has reluctantly just retired from a firm he helped built, thanks to the craftiness and wallet of Howard, has been making serious strides in battling his illness. Chuck has spent the majority of Better Call Saul being a hump and a character that we hate. “How could he possibly be so mean to Jimmy” we say even though we see what Jimmy is doing. Maybe it’s because we believe that with a little guidance Jimmy wouldn’t be this way or maybe it’s because Chuck represents a love unreturned, I don’t know, but in a lot of ways he was the make shift “villain” of this series. Always looking to destroy Jimmy instead of nurturing him. Although, once he was rid of the burden of Jimmy, Chuck changes. He becomes someone we can relate to. A man who has seemingly lost everything while fighting to obtain some semblance of his previous life. Hell, I was rooting hard for Chuck these last few episodes. Then that encounter with Jimmy happens and it all falls apart. Literally. 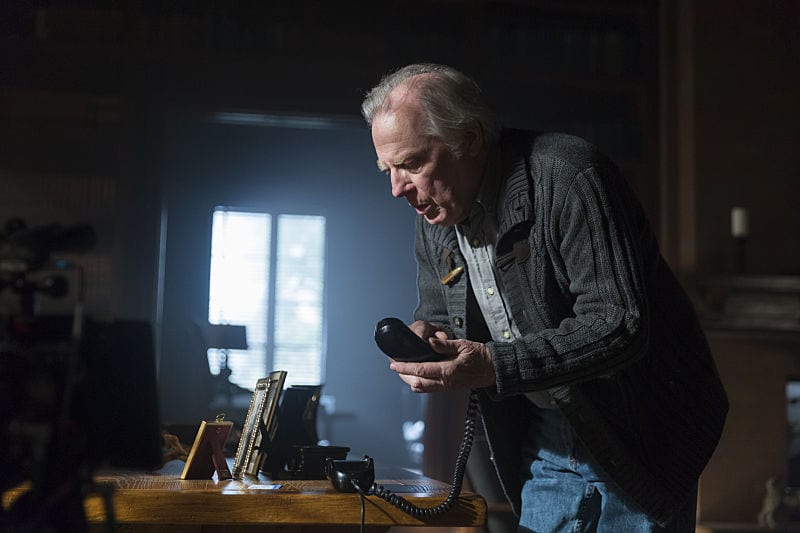 “You’ve never mattered all that much to me” might be the harshest thing I’ve ever heard one character speak to another. Chuck casts aside Jimmy’s apology not because it’s insincere but because it has become a cycle. Jimmy commits an act, something bad happens, there are consequences, Jimmy feels guilt. Chuck flat out tells him he’d respect him more if he wasn’t sorry and just carried on life as usual, and in a lot of ways I think this is going to be the seed that grows in to Saul Goodman going forward. Because when the last thing your brother says to you is “you’ve never mattered” that is bound to have some sort of devastating life altering effect on a person.

We can argue whether or not Chuck actually meant what he said, and I to a degree believed he did, but what we can’t argue is the effect that Jimmy has on his life. As soon as Jimmy re-entered Chuck started to deteriorate again as he opened the door to feelings Chuck didn’t want to confront. Guilt? Probably not. But the fact that he could never be free as long as Jimmy was a part of his life seemed too much for Chuck to burden. Suddenly his illness came back to the point where he couldn’t battle it. There were not enough space blankets in the world to keep his pain at bay and we watched as Chuck rapidly lost his mind. This scene was so beautifully shot and scored that even as Chuck spiraled out of control my heart filled with sympathy but my eyes couldn’t keep me from watching. I was drawn into his madness and suffering with a comforting jazz tune, and was captivated in its sadness.

Chuck’s demise was brutal to behold, again all the Emmy love for Michael McKean, and punctuated so hopelessly with it’s conclusion. I’ve tried to think if I’ve ever seen another character actually go mad before and I’m hard pressed to think of one at the current moment. Perhaps that’s in large part due to the brilliance of McKean’s performance but perhaps it’s also because of the sadness of it all. Chuck slowly kicking over the lantern into a pile of newspapers was like watching a man starve to death. Even at the end Chuck was too proud to kill himself and slowly willed the gods to help him do it. The sense of sweet relief when the lantern finally hit the floor was heartbreaking in its freedom. Some may question in the off season whether Chuck lived or died, and that’s fair, but I think the suicide hotline number before the credits (1-800-273-8255, know you’re never alone) underlines the finality of the act.

Where do we go from here? The ripple effects from Chucks death will be felt. This will probably be the act that turns Jimmy into Saul, I fully expect Kim to be riddled with guilt, and Howard… I imagine this will bring about a shift in character in everybody’s favorite jerky lawyer. There is a gravity here that the show didn’t dance around but presented both gracefully and tragically. 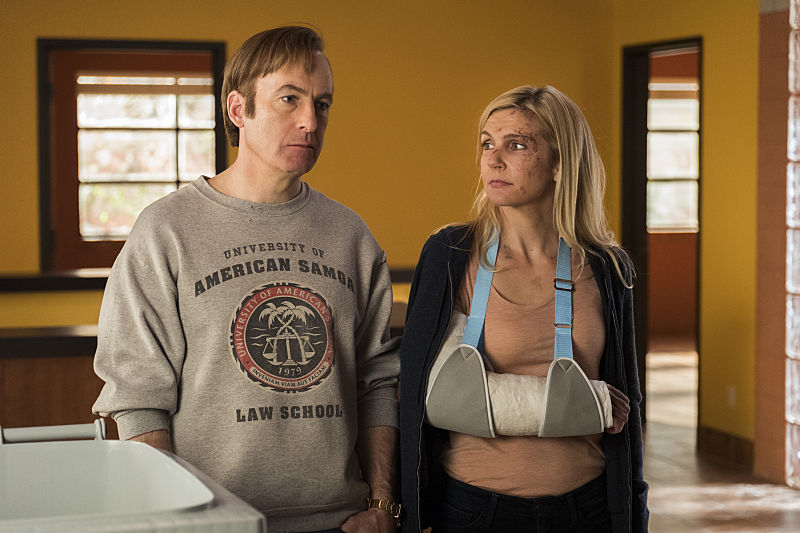 Ugh, I haven’t even touched on other areas of this spectacular episode. Some other quick thoughts-

There you have it Geeklings, I know another long review but you have to admit there was a great deal to cover with this. While Better Call Saul has yet to be picked up for a fourth season I find myself relatively stress free about that. This show is a proven commodity linked to the greatest show in television history. The ratings are steady and it’s established itself as a critical hit for AMC. I think it’s just a matter of time before we hear that season four is coming. Stay calm everyone. In the mean time though, what did you guys think? Were you as impressed with the brilliance of this episode as I was? What do you think Chuck’s death means for these characters and most importantly Jimmy? Did Jimmy do the right thing here? Sound off in the comments below or find me on Twitter @iamgeek32 if you want to talk all things Saul or Breaking Bad.

It has been a pleasure spending my second season of Better Call Saul reviews with you, and I hope you enjoyed reading them as much as I enjoyed writing them. In the mean time you can find me here at Fan Fest covering Orphan Black, comic books, and Preacher next week. Hope you’ll come visit. Until next season everyone!