Fantastic Beasts 3 saw the departure of Johnny Depp, as Grindelwald, as a result of Warner Bros asking the star to retire himself from the role. Amid these controversial developments and the ongoing trial between Depp and Amber Heard, fans are petitioning to have Heard fired from Aquaman 2.

Amber Heard is still involved in Aquaman 2, which has equally angered a lot of fans, as they believe Warner Bros isn’t equally handing out punishment. The internet is demanding that she also resign. In fact, a petition has now reached passed four million signatures. 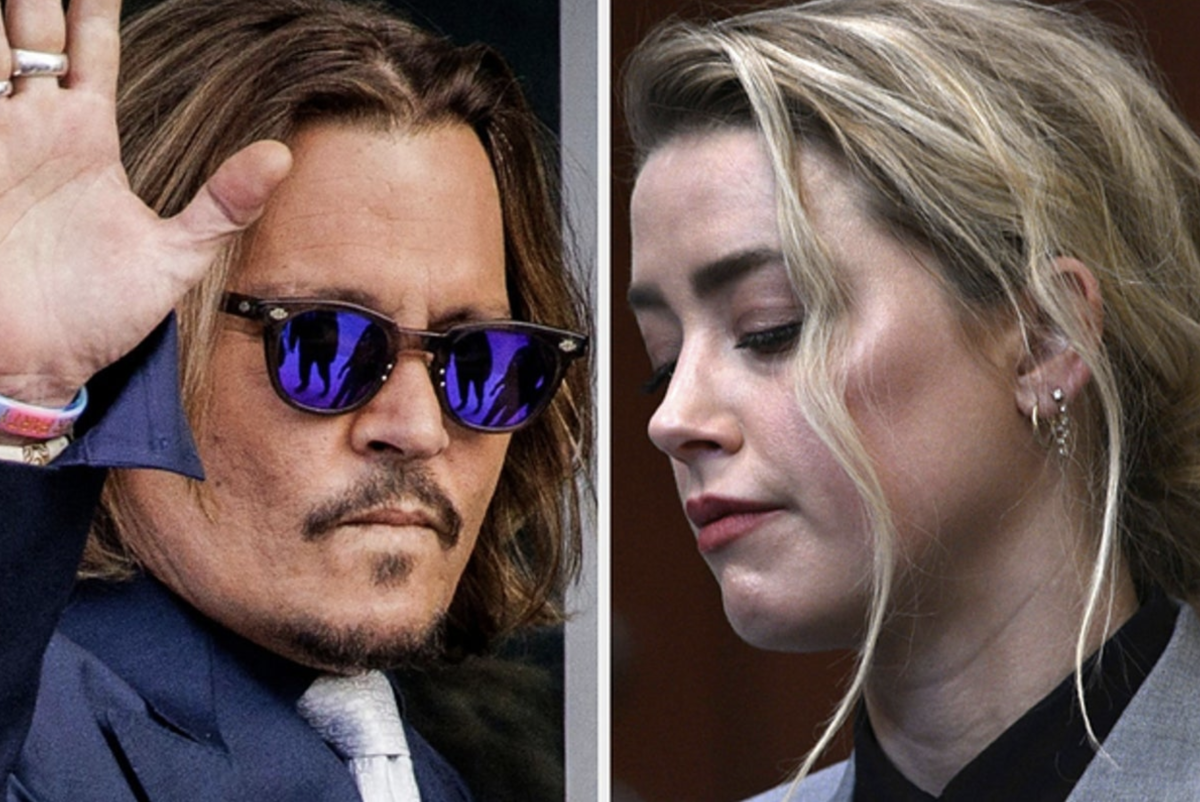 The trial between Depp and Heard has brought to light that Warner Bros. did, in fact, reduce her role.  Heard testified that she had to fight to remain in the film.  It’s now possible that Heard will receive less than ten minutes of total screen time in Aquaman 2 as a result of what has come to light.

“I’m super excited about the amount of fan love and the amount of fan appreciation that Aquaman has acquired and that it has garnered so much excitement for Aquaman and Mera that it means we’ll be coming back. I’m so excited to film that.”

She continued, “Paid rumors and paid campaigns on social media don’t dictate [casting decisions] because they have no basis in reality. Only the fans actually made Aquaman and Aquaman 2 happen. I’m excited to get started next year.”

Yet, Warner Bros still remains silent when it comes to Heard’s status.   No one from the company has been called to testify about the claims that Heard has made about her reduced role in the film.

However, from our sources, we previously heard that Emilia Clark may be either cast as Mera OR be given another female lead part as a new character but carry on the same story that was intended for Mera. 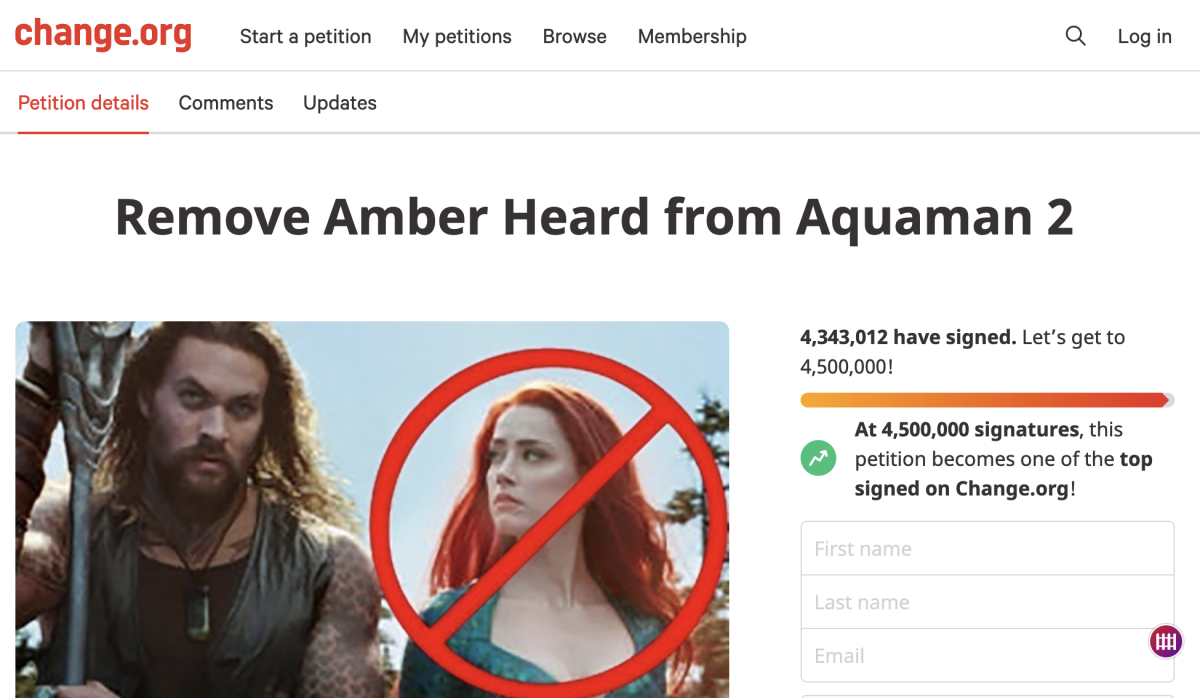 Here’s what the person who posted the petition is saying:

Amber Heard has been exposed as a domestic abuser by Johnny Depp. In his $50 million lawsuit, Johnny Depp describes many incidents of domestic abuse that he suffered at the hands of his (then) wife Amber Heard, including one incident where she punched him twice in the face and another where she shattered his finger with a vodka bottle, and his finger had to be surgically reattached. He will bear the scar from that for the rest of his life.

Since Heard’s divorce from Johnny Depp, she has systematically crusaded to ruin Depp in Hollywood, repeating multiple accounts of fake incidents in which she had actually abused Johnny Depp, but lied and created false accounts of him being the abuser. About the incident during which she shattered the bones in Johnny Depp’s finger and nearly severed it, causing Depp to require surgery to reattach and repair it, Heard presented a false story claiming that he cut off his finger himself, dipped it in paint and scrawled obscenities all over the walls.

Likewise, Heard recounts fabricated incidents of Johnny Depp hitting her in the face when she had, in fact, punched him. Though staff and neighbors in the building where she lived reported seeing no marks on her face in the hours and days after she says Johnny Depp hit her, yet she appeared in court six (6) days later with bruises on her face, asking for a temporary restraining order, which was granted. Photos of Heard from the very next day show her full face, without makeup, and not a single bruise.

As Amber Heard is a known and proven domestic abuser, Warner Brothers and DC Entertainment should and must remove Heard from their Aquaman 2 film project. They must not ignore the suffering of Heard’s victims, and must not glamorize a domestic abuser.

Men are victims of domestic abuse, just like women. This must be recognized, and action must be taken to prevent a known abuser from being celebrated within the entertainment industry.

Do the right thing. Remove Amber Heard from Aquaman 2.

There’s a lot of upheaval on the internet too. Here’s a few select tweets from fans of Depp from right when the petition began.  Nearly two years later, nothing appears to have changed about how Depp fans feel about Amber Heard.

I don’t understand why Warner bros fired Johnny Depp but not Amber Heard. They both have evidence of being abused by each other, and women who are abusive are almost never held to the same standard as men who are abusive. fire both or fire neither.

Its a double standard.

This is why men don’t come forward about domestic abuse or rape.

She even said it. No one is going to believe that a 115 pound woman abused a grown man. She said they would laugh at him. This whole situation is disgusting. Amber Heard should be fired.

#Aquaman2 needs to fire Amber Heard. She is the abuser. #AmberHeardIsAnAbuser #JusticeForJohnnyDepp

@wbpictures not happy! you fired one of the best actors ever. But your going to let Amber Heard stay and do her acting yet she’s just as guilty maybe more than him, how is that fair?! If your going to fire him then fire her!

@wbpictures hope you will fire @realamberheard to.. if not Then dont waste your money on Aquaman 2 no one wanna see it with her in it #AmberHeardIsAnAbuser #AmberHeardOut #JusticeForJohnnyDepp

That’s not why people are upset. He had recordings, evidence that Amber Heard abused him, and WB decided to fire him because a UK judge with ties to Amber decided to side with the paper he was suing for libel that said he beat her with no evidence but AH faulty Testimony.