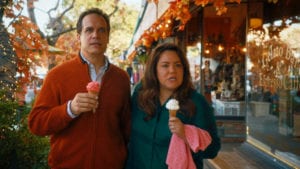 While walking down the boulevard of broken dreams in Westport, Greg (Diedrich Bader) and Katie (Katy Mixon) realize just how boring the people around them are. Until they meet Zach and Courtney and suddenly it is as if they had met their dream “BFF Couple”. Doris (Ali Wong) crushes Katie’s hope when she reveals why the other couple is so awesome it is because they don’t have children. Well, desperate for adult interaction and conversation that did not involve topics like what their children were allergic too, how often their kids went to the bathroom or what sports their kids excelled at, the Otto’s do the only thing a rational mother and father could do…..Pretend they don’t have children. 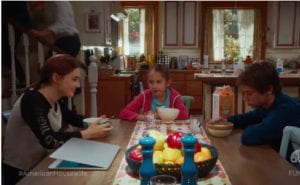 While they were out double dating and living the “children” free lifestyle, they left Taylor (Meg Donnelly) in charge or should I say Oliver (Daniel DiMaggio) no better make that Anna-Kat (Julia Butters). In order to go to a concert with her friends, Taylor has to babysit her siblings. Of course, there is always a price to pay when you deal with your siblings. For Oliver, it included slow rides, big houses and Zillow. It was Anna-Kat that played the big game making Oliver and Taylor write her “dark” story for Kid Lit Night at school. Even at such a young age, Anna-Kat plays hardball.

The Otto’s double life starts catching up with them on the road to hang out with Zach and Courtney overnight and realizes that their parent side could not miss Anna-Kat’s Kid Lit Night even if there was a promise of hot tubs, wine and no children. Besides parenting is 90% of doing stuff you really do not want to do but it is that other 10 percent that makes it worth it all.