Alanna Masterson (Tara), Ross Marquand (Aaron), and Seth Gilliam (Father Gabriel) joined fans for a panel where they talked in depth about what’s to come for their characters on the show. With Alexandria in the rearview mirror, our final glimpses of the quaint sanctuary the group called home came last week as Rick and Michonne drove off after burying Carl, these three will be some serious movers and shakers when it comes to the fate of the Alexandrians in the coming season.

Now, Tara, Aaron and Father Gabriel all had some very suspicious origins and introductions. Gabriel was found scrambling to survive in the woods and later revealed that he let his whole church perish outside his walls. Tara was first introduced as an ally of the Governor, and Aaron just randomly popped up talking about a safe haven, which was a schpeel the group had heard one too many times before. So, when an audience member was asking a question the trio began arguing over which of their characters was deemed “the sketchiest” and hilarity ensued.

“You literally let people die and you’re a preacher! I was always a nice guy. I gave people water and a place to live, I was always nice!” Marquand said in defense of backpack weidling Aaron.

He’s right too, Aaron has always been a nice guy as is evident by him taking a risk and heading back to Oceanside in hopes of trying to convince them one more time to join their fight.

.@RossMarquand explains why he thinks Aaron is so determined to go back to Oceanside. #WSCLondonpic.twitter.com/Uf0NzXF4GZ

Of course, one of the most trending subjects across all WSC panels has been the loss of Carl (Chandler Riggs) and the three shared their thoughts on hearing the news and how his departure affected them.

The three share their reactions to finding out Carl’s fate! Alanna lost her chess buddy, and Ross was shocked! #WSCLondonpic.twitter.com/bJIchSI2kG

Marquand says that he learned the of Carl’s fate by reading the script and even though he was genuinely shocked, he touched on the fact that the series is known for switching things up from the comics.

“I think we all thought he was going to be the new leader of the show down the road- the future. The comics vary from the show quite a bit and I think that’s what makes the show interesting…it keeps challenging your expectations. I thought it was surprising as hell, but for the show overall it’s going to do some amazing things for Rick and motivates him in ways we’ve never seen before.”

Masterson had found out earlier from Riggs himself.

“He gets to go and work. I mean he’s 18 and he’s been on the show since he was 10, he’s probably just over it at this point. And gets to go play amazing new characters and I’m so excited to see where his career goes,” Masterson said.

Thankfully, Marquard whipped out some of his incredible celebrity impressions, which needs to happen every time he’s on stage if you ask us. So, for a short minute Ross Marquard left the stage and Matthew McConaughey took over in all his Lincoln town car glory.

With Father Gabriel making his way out of the Sanctuary, Aaron in Oceanside, and Tara having to be on the same side as Dwight, it’s safe to say that we are really looking forward to what’s coming for these three! 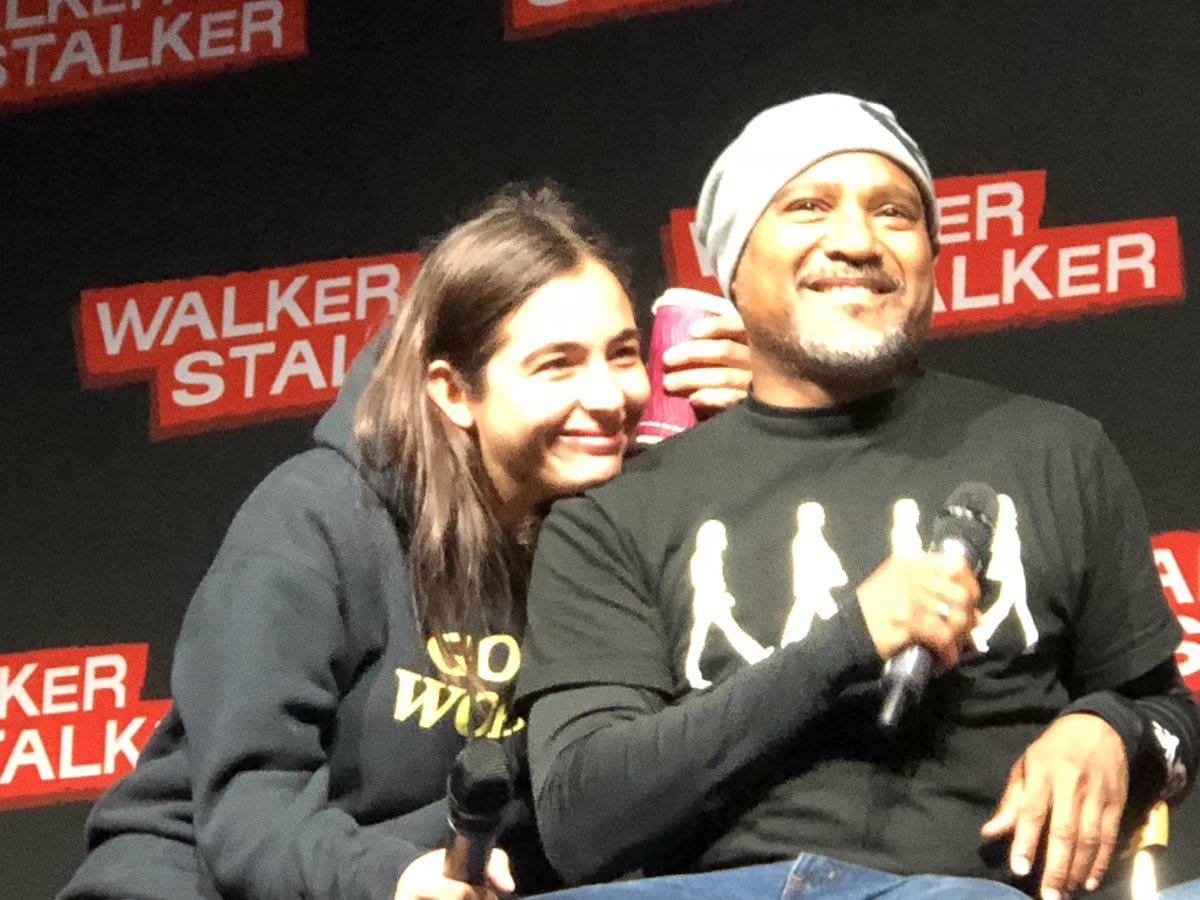 For more of our Walker Stalker London coverage head to our Twitter account for live updates and be sure to check back here throughout the weekend for all of the amazing panels and behind-the-scenes action you may have missed! And be sure to catch all new episodes of The Walking Dead Sundays at 9:00 on AMC.