The detailing in Batman V. Superman is amazing. That after the movie these details get released, is even better for the fans! We get to look a little bit deeper into the universe. We already saw a detail this week of the Robin suit in the case. The suit in the case was holding a weapon. Take a look: 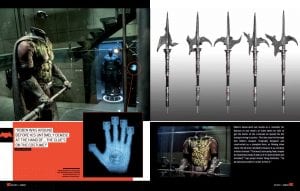 It’s not the normal quarterstaff we were used to in the comics. But you have to remind yourself that Zack Snyder’s universe is much darker and more dangerous than we are used to. No other details of which Robin it is, is not cleared up yet. But a lot of fans are thinking it could be Jason Todd.

Other details that has been released by Digital Spy, is the engraving on the sword of Wonder Woman. Take a look below: 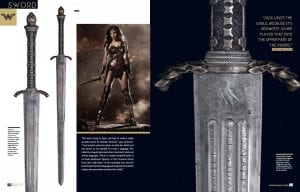 The details in the sword are just mind blowing if you ask me. Zack Snyder and Doug Harlocker took in a linguist and came up with a whole new language. This much trouble, to put a quote engraved in the sword from a book called ‘Godesses: Mystery of the Feminine Devine’ written by Joseph Campbell. Zack Snyder liked the quote so much that he had to have it engraved into the blade of the sword. Amazing, right?

The quote was translated and says this: ‘Life is killing all the time and so the goddess kills herself in the sacrifice of her own animal.’

Isn’t that such a powerful quote?