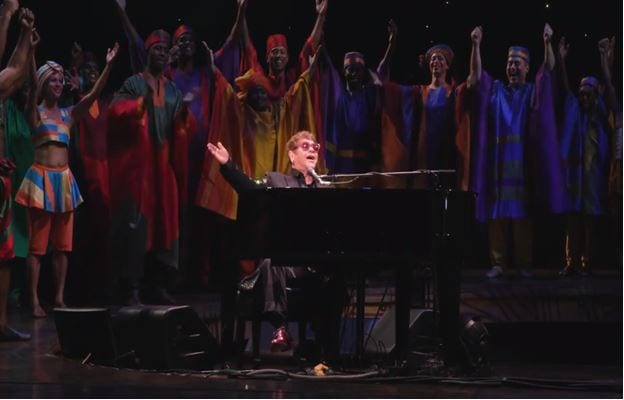 As any true Lion King fan knows, John co-wrote the music for the 1994 Disney animated hit as well as it’s super popular stage adaption. The show premiered on Broadway in November of 1997 and to commemorate the milestone Elton John took to the stage after the show’s curtain call and performed “Circle of Life” alongside cast members from the show.

Since it’s NYC premiere, the stage adaption of The Lion King has had over 24 global productions that have been seen by more than 90 million people. Disney on Broadway has also said that The Lion King’s “worldwide gross exceeds that of any film, Broadway show, or other entertainment titles in box office history.” In 1998, The Lion King won six Tony Awards including Best Musical, Best Direction, and Best Choreography.

Fans of Simba, Nala, and the gang are in for a treat as the popular film will be given a fresh take in Jon Favreau’s upcoming live film adaption, which will include the talents of Donald Glover, Beyonce, Seth Rogen, James Earl Jones and more.