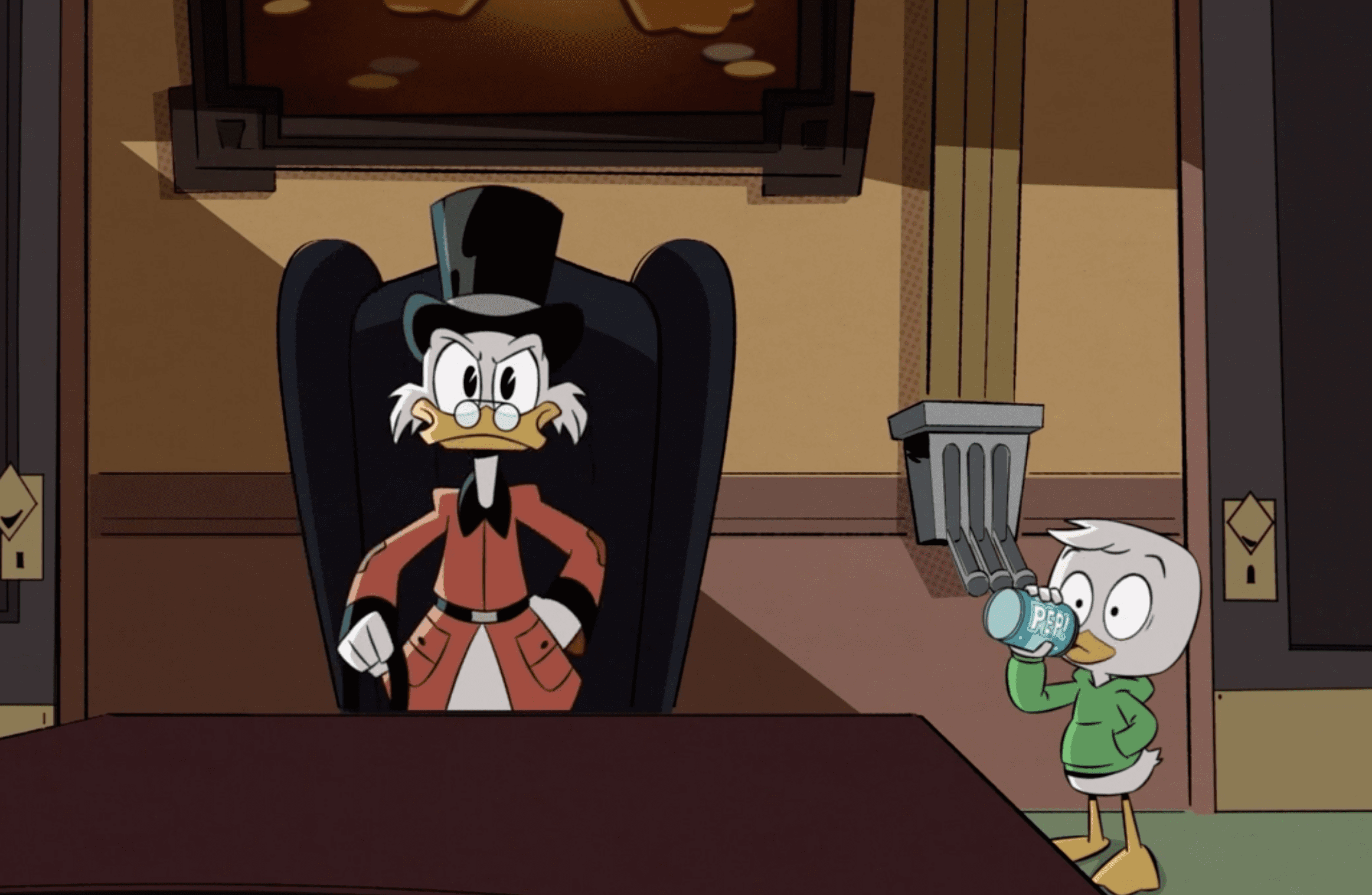 As I mentioned in my last article, there were two episodes of Ducktales this week. And whereas both kept the spirit and energy of the premier going, there was one that was the clear winner in terms of humor, references and packed yet concise story. So if you already haven’t seen it, pull up your DVR or check out the link below to watch it on Disney XD, and let’s get ready to take a Closer Look at Ducktales (2017) Episode 03, “The Great Dime Chase!”

A Connected Yet Diverging Tale:

Thus far in Ducktales, we’ve seen each episode begin with two seemingly different plotlines that end up connecting/ resolving with each other. This episode changed that mechanic a bit as we were introduced to the two main plot lines – (1) Scrooge teaching Louie about an honest day’s work & (2) Dewey and Webby looking for information about Della Duck – and then immediately saw them intertwine before permanently diverging. This entire episode might take place in Scrooge’s money vault, but their plotlines in no way unite or resolve each other. In fact, when Louie’s and Dewey’s stories do show the potential to cross thanks to ‘Rampaging Little Bulb’, they reject each other and go back to handling their own troubles. This is our first instance of two storylines not uniting to solve a problem, but rather forcibly remaining separate because what each is trying to achieve is THAT important. But what does each storyline aim to achieve?

As the episode title suggests, the main adventure this week involves Louie’s attempts to get back Scrooge’s Number 1 Dime. Scrooge’s Number 1 Dime has been a staple lore item of the series for years now, so it was nice to see it paid proper homage here – especially the final reveal that the dime Louie was chasing all episode long was just a decoy. Though despite all the comedic timing and meta-humor this storyline brought (which I’ll get into later), this storyline’s larger purpose was to set up the introduction of one of the biggest fan favorite characters, Gizmoduck!

Now we’ve known for a while now that Gizmoduck would be making a comeback in this series as well and would be played by the one and only Lin-Manuel Miranda. Even though we’ve yet to meet Fenton Crackshell (Scrooge’s accountant and Gizmoduck’s alter ego), this episode does introduce us to Gizmoduck’s creator, Gyro Gearloose. That being said, the Gyro we meet in this episode is quite different from the Gearloose we knew in the old cartoon. Much like the other characters in this series, Gyro certain does has a few “gears loose” and can truly be described as a “Man Scientist”. So when he writes down “Project Blatherskite” at the end, this line of thinking is to make himself into a robot. So considering the sinister tone of his voice and the fact that all his inventions go bad, perhaps Fenton’s bumbling places him in the suit and saves the day – or Gizmoduck will be Gyro’s way of making up for his past evils. Either way, Project Blatherskite is a go!

The secondary storyline of this episode picked up where the Ducktails premier left off in terms of exploring the mystery of the boys’ mom, Della Duck! After a mock Indiana Jones-esque adventure and a lot of laughs, this storyline finally gave us an answer. Though sadly – or rather rewardingly – that answer only led to more questions to be explored in future episodes.

We know from the start of the episode that no one ever talks about her, and Scrooge seems set on keeping it that way. We hear the story of how even when the Post Office delivered some junk mail using Della’s name, Scrooge immediately bought them out and shut them down. Why the secrecy? Well it seems this has to do with Della taking one of Scrooge’s artifacts, the Spear of Seline. What mystical properties/ importance this spear has remains to be seen, but it looks as though this will indeed be the season long mystery that will slowly be unraveled piece by piece, clue after clue.

Next week, begins the single episode per week airing schedule and we – or rather Webby – will again go head to head with the Beagle Boys! So stay tuned!