Sheldon’s  parents begin to worry about him because he doesn’t have friends. They ask Georgie to sit with Sheldon at lunch, but he refuses.

Sheldon, of course, is fine with that. He’s content reading in the library. He finds a book on how to make friends. 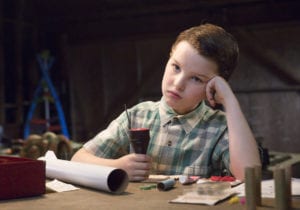 He decides to practice the principles that are in the book on his neighbor, Billy. It is less than successful, so he tries again, and again. All attempts were not successful.

Missy points out that he has a list of “losers” who checked out that book before him. Since they also needed help making friends, Sheldon should seek them out.

Ms. Ingram and Mrs. MacElroy are on that list. Apparently self-help books cater to depressed adults.

When he returns the book, Sheldon meets a kid who is in the same boat. His name is ___ and he likes rockets just as much as Sheldon does. 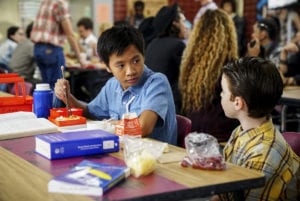 His mother, being ecstatic, asks Sheldon to invite his new friend to dinner. It’s interesting to see that Mrs. Cooper has always been less than politically correct.

The casting choices are brilliant! Using Zoe Perry for Mrs. Cooper was perfect. This show is doing a great job with Sheldon’s character and keeping him true to the Sheldon we know and (most of the time) love. I have high hopes for the rest of this season. See you all next Thursday.

‘Young Sheldon’ goes to High School in this New Promo